In the last fifteen years, interest in aerial photography has boomed, as evidenced not only by the 46,000+ pictures that pop up when you search for “drone aerial” on 500px but also by data from Google Trends; since 2013, when DJI released their first consumer drone, searches for “drone photography” have increased substantially over time.

Aerial views might once have been reserved for those with an unlimited budget and access to a helicopter, but today, they’re accessible to anyone who can pilot a drone—from real estate photographers looking to outdo the competition to landscape photographers focused on conservation. Even some of the biggest names in aerial photography, including Edward Burtynsky, who famously uses a helicopter and large format camera, have embraced drones.

This year, contests like the Drone Photo Awards and the Paris Aerial Photography Awards have made waves, inspiring more people to explore their surroundings from a bird’s eye perspective, and on 500px, the “Aerial” category has seen an influx of breathtaking views from around the world.

For much of 2020, we were limited to areas close to home, but drone photography allowed us to travel the world in our imaginations. We’ve seen the volcanic landscapes of Iceland, the streets of Lisbon, the sands of Algeria, the wilderness of the American West, and more through the eyes of talented artists working across continents. Here are just a few of the breathtaking drone pictures that have bewitched us in recent months.

In January, Ryan Longnecker visited Wyoming, soaring high above the winter forests around Grand Teton National Park. “Today, I woke up early again to go see if I could see the Tetons from Snake River Overlook—a view made famous by Ansel Adams,” he wrote on the sixth.

“The peaks were mostly cloud-covered, so I continued on. With sidewinding snow on the road, I still had a chance to pull over and get a top-down snowy tree picture. I have a pretty solid belief that people’s hearts for this planet will only grow the more of it they see—I would hope, anyway.”

This year, the travel and landscape photographer Glenn Gil made the journey to the Lofoten Islands in Norway, where he witnessed the sublime mountains and fjords, wide-open roads, and the magical light that descends over the homes during the blue hour. In February, Omar Dib made the trip to Djanet, one of his favorite spots in Algeria. “This region is well-known for its stunning landscapes, its black rocks, and the specific colors of its sand: red, yellow, and orange,” he writes. The Estonian photographer Tuule Müürsepp caught this moment at Luhasoo Nature Reserve, through which runs a trail offering views of a black lake, bogs, and water lilies. The reserve is home to wolves, bears, elk, and an array of swampland wildlife. 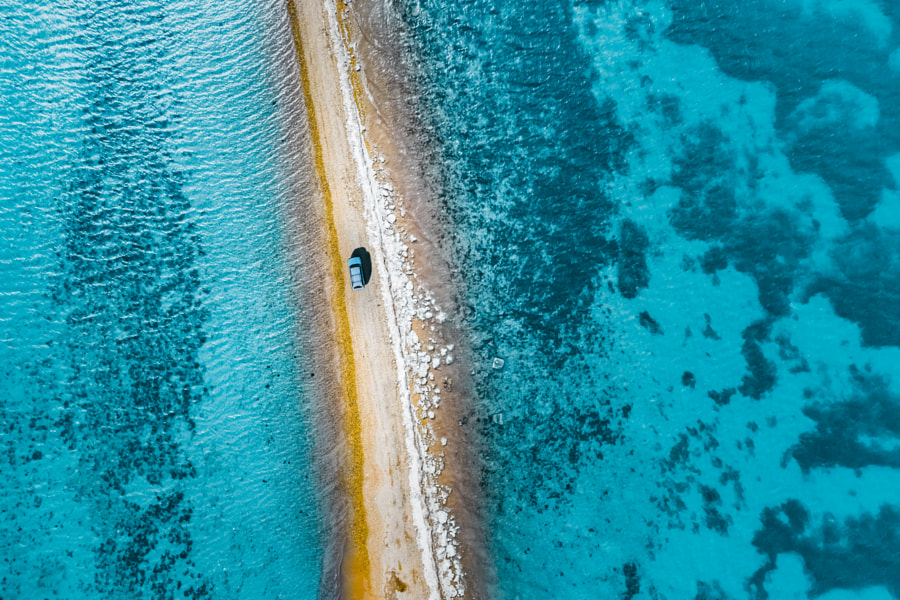 Vitaly Tyuk bought his first drone in the summer of 2015, and he’s been capturing aerial scenes from home and abroad ever since. He’s based in Shanghai, but he took this picture in March while social distancing in Vladivostok. He was there at the perfect moment; the snow hadn’t yet melted away completely. His neighborhood in Shanghai might be bustling and crowded, but in the Russian Far East, he was free to roam—with barely another soul in sight. 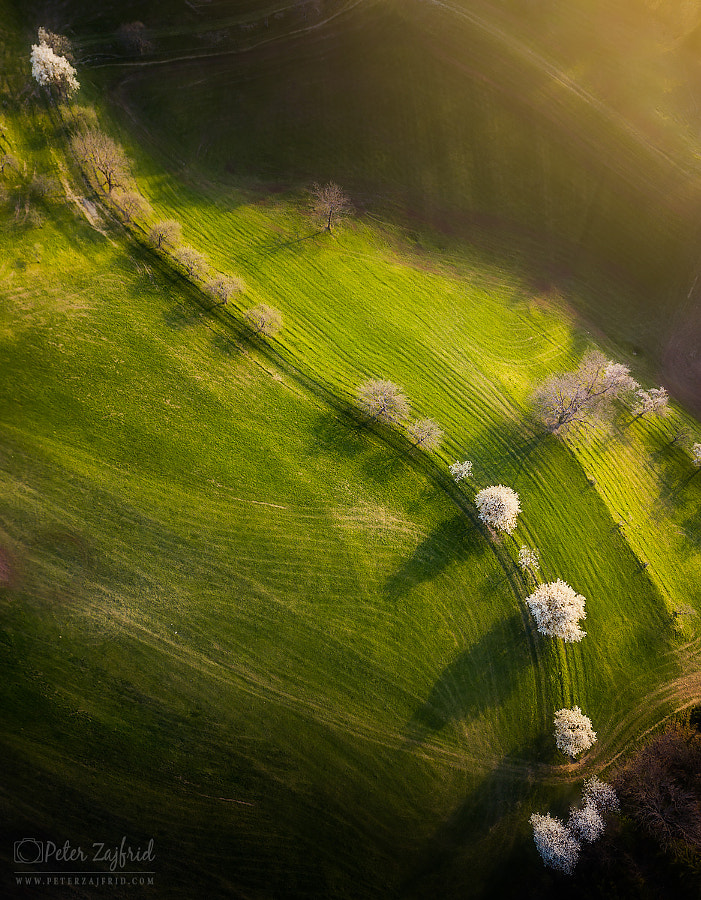 Throughout the spring and into summer, the photographer Peter Zajfrid chronicled the changing landscape of Slovenia, including this ephemeral moment on Pohorje hill in April. Often, he raced the sun to reach these spots at just the right time, as the early rays and morning mist blanketed the rolling hills, transforming them into scenes from a painting. 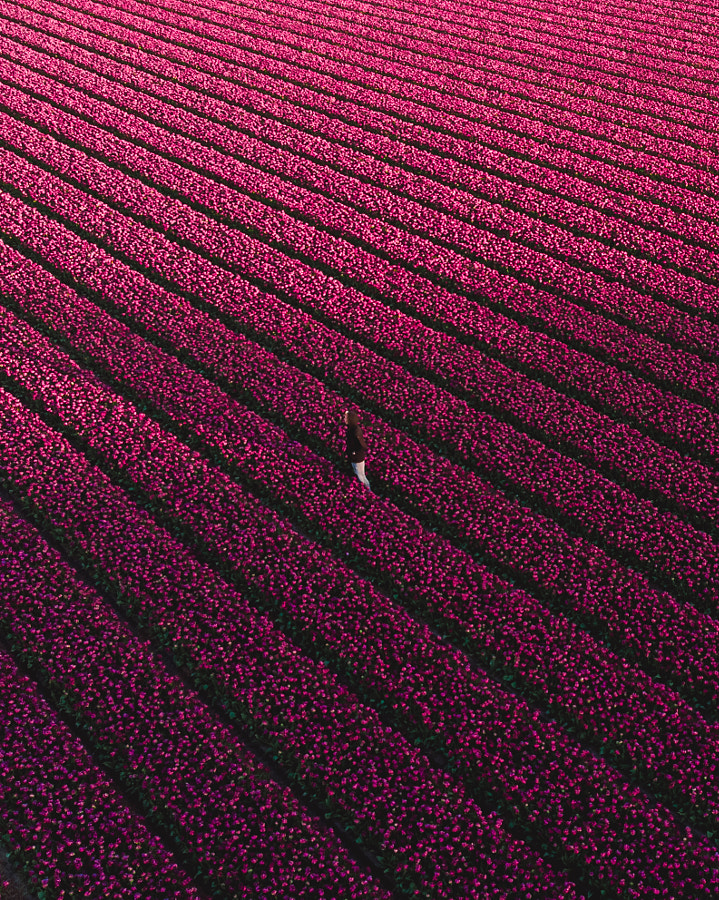 In April, the Dutch photographer Mike Tesselaar flew over Holland’s iconic tulips as the sun set. “The yearly visit to the local tulip fields [was] isolated this time around, sadly,” he wrote from the town of Petten. “I’m hoping the tulips will be left untouched in this part of the Netherlands, as some farmers are forced to remove the tulips to reduce tourism during the [coronavirus] outbreak. Still, I love the springtime here; it’s just amazing how much better everything looks with color.” “Due to the coronavirus, the streets of Copenhagen are extraordinarily empty,” Mathias Nesgaard wrote this spring. He took this picture at the Cirkelbroen, a unique pedestrian bridge designed by the Danish-Icelandic artist Olafur Eliasson. 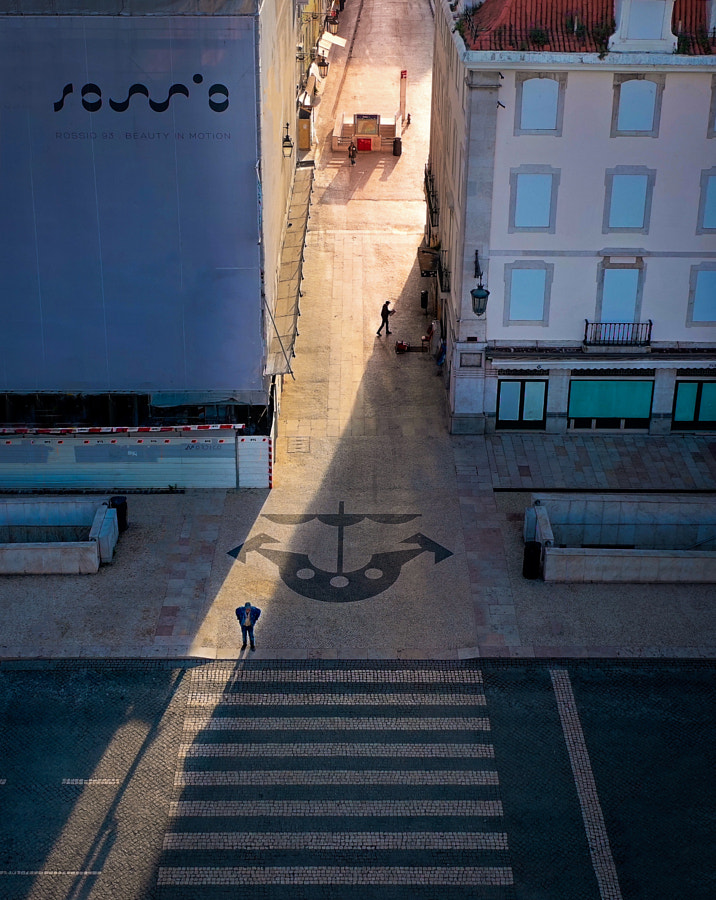 Quarantine in Lisbon didn’t prevent the Portuguese photographer Artur Carvalho from creating pictures; it just inspired him to work differently. This image is from a series of drone street photos he took during isolation. Often, he had to wait for long periods to capture the right people in the right light, but it often paid off; this spring, he wrote, “[Some moments] are like going fishing and catching a whale.”*

*Translated from the original Portuguese. 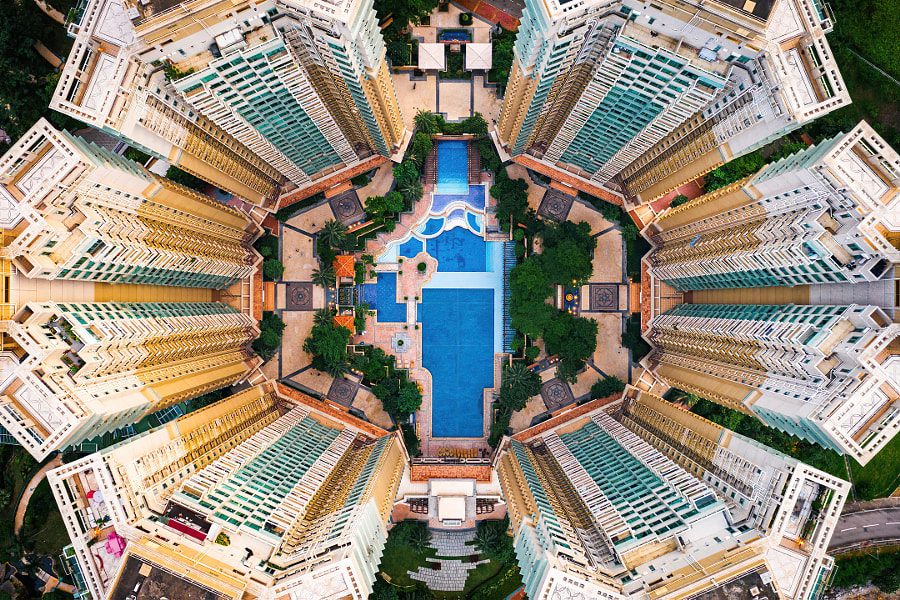 Many photographers have worked in Hong Kong; few have captured it like Andy Yeung. Drawing inspiration from the history of the Kowloon Walled City, a settlement that was demolished in the 1990s, his series ‘Walled City’ focuses on the urban density of the city today. 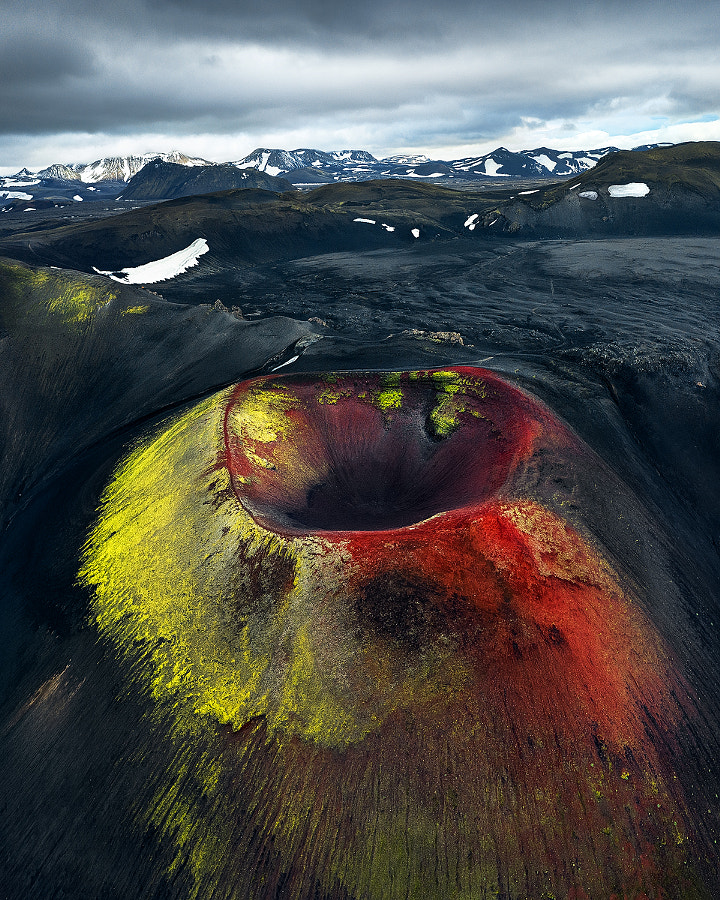 In July, Daniel Gastager embarked on a three-week road trip through Iceland; it marked his fifth visit to the country but the first in the highlands, where he came across this vibrant crater amid the black volcanic terrain. “The contrast in the highlands is simply unbelievable,” he writes. 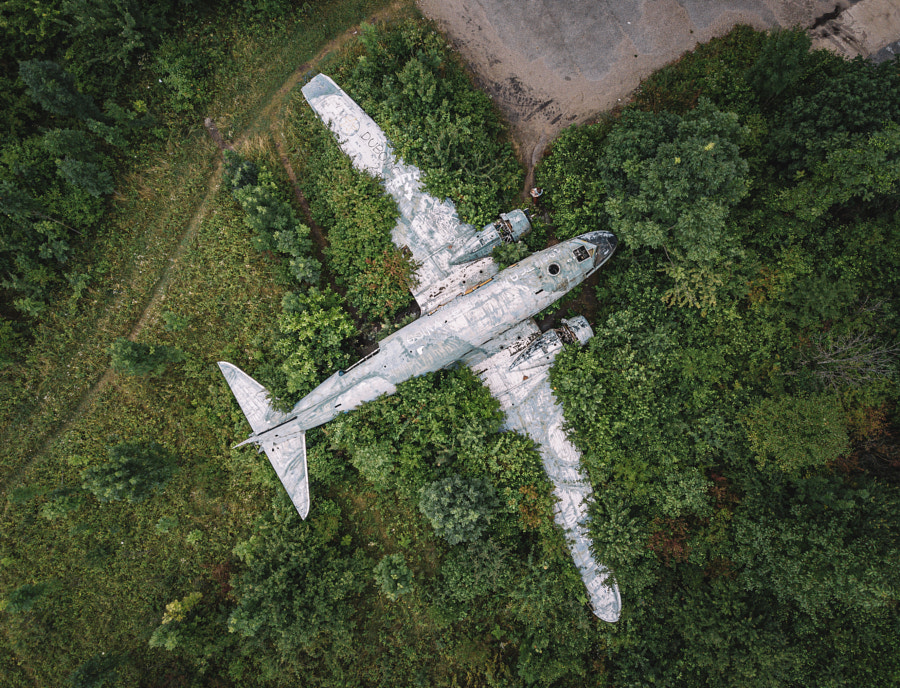 Jelle Canipel photographed this lost Douglas C-47, known as the Dakota or Skytrain. “It’s situated in the green of the Zeljava Airbase, situated under the Plješevica mountain,” Jelle writes. “It was the largest underground airport and military air base in Yugoslavia and one of the largest in Europe.” Jon Hilmarsson photographed these glacial pools in the Icelandic highlands in August. On its own, it’s a mesmerizing abstraction, but it’s even more resonant when we consider the threats facing the Icelandic landscape; in 2014, for instance, the Okjökull glacier became the first to melt away due to climate change caused by humans. Jon’s images serve as an enduring reminder of the beauty of this place—and the importance of protecting it for generations to come. Andrea Livieri revealed a different view of the waters of Iceland in The River Veins, showing us nature’s canvas as glaciers melt and run across the black volcanic sand. He was hiking around Landmannalaugar, a geothermal oasis off-the-beaten-path in the highlands. “Landmannalaugar itself is made up of rugged lava fields, hot springs, and colorful rhyolite mountains,” he wrote at the time. “Shades of red, pink, green, blue, and golden yellow make for an ethereal location.” Aline Fortuna spent three months traveling Brazil by bus, passing through ten states and traversing more than 10,000 kilometers. She captured this scene in Jalapão in Tocantins, where you can find crystal-clear springs, rivers, and streams. The French artist Notseig, who composes music, draws, and makes photos, captured this labyrinth somewhere in the world. Though he keeps the location a mystery, he draws a parallel between its forms and the structure of the human brain. Lake I??kl? in Turkey is a paradise for nature photographers, who flock there from around the world to see the array of birdlife, including species who are sadly endangered, rare fish, and waterlilies. While sunrise and sunset photos are popular in the area, the Turkish photographer Bahadir Sansarci gave us an unusual vantage point this summer. The photographer and drone pilot Szabo Viktor captured these views of a mine lake close to home in Hungary before manipulating them, transforming them to scenes from another planet. 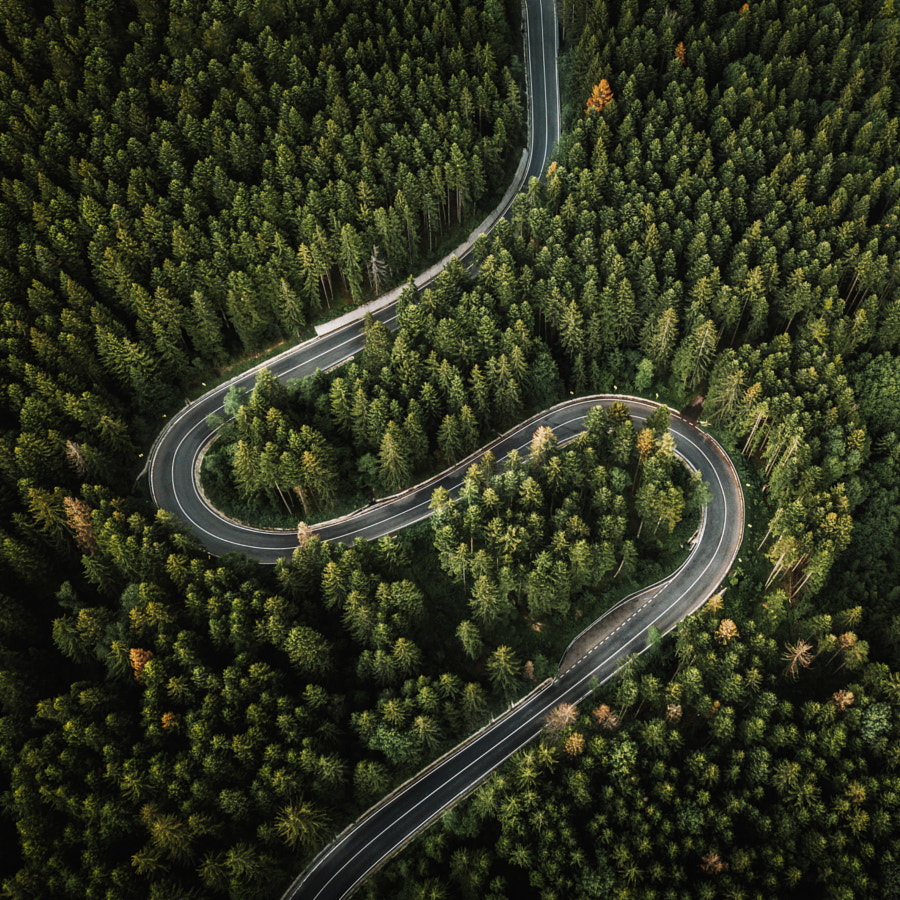 The Transylvania-based photographer Szabo Ervin-Edward soared over this evergreen dreamscape in June, creating a classic illustration of the manmade and natural worlds existing side-by-side. 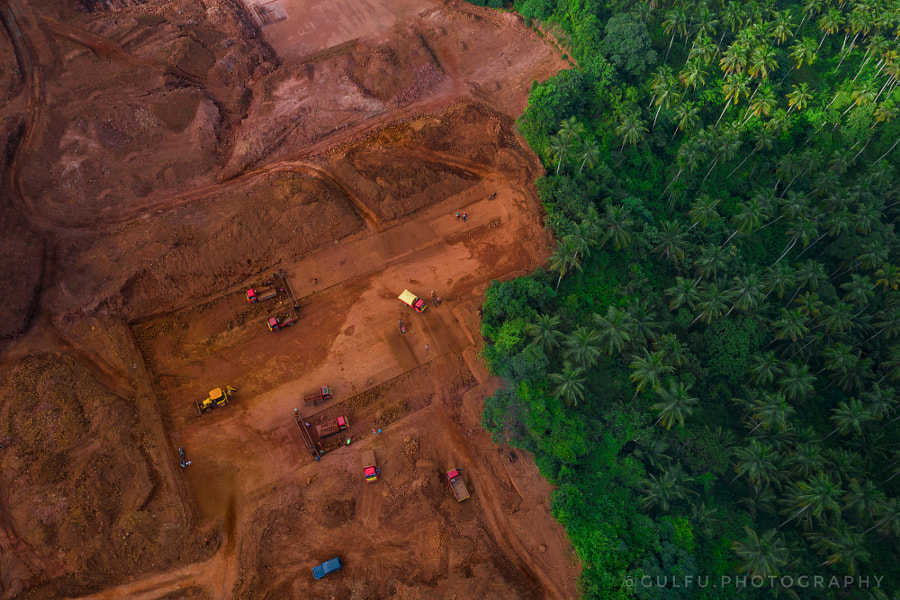 Sometimes, beautiful landscapes tell painful stories about the relationship between humankind and nature—and our exploitation of its resources. Gulfu Photography’s drone view from Malapuram, Kerala, India, is a powerful example.