This post is written by Dina Belenko, a 500px Ambassador who specializes in still life photography.

Still life is likely the most underappreciated genre in photography. Audiences like to see a human presence in a shot, like the faces of other people, which is thought to be inconceivable in the genre of still life. That is definitely not true. In this post, I am going to show you how you can shoot still life with the same character and significance that would be in a portrait shot.

I call this approach “persona”, as that is how I was taught to call the main character in a poem during my school years. The persona is not the author (or, in our case, a real-life model, like in a portrait), but a narrating character in the story. The idea of this trick is to choose a persona and arrange the shot around them.

This should be someone unusual, interesting, and extraordinary: a pirate, a geologist, a magician, an explorer, a circus performer, a writer, an astronaut, a botanist, an audiophile, a sommelier, a cowboy, or maybe even a puppet master.

Try to imagine this character in as much detail as possible. Do not resort to broad thinking. For example, if your character is a traveler, take some pen and paper, sit down and make a list of all the travelers you can come up with. Not specific names though—rather, list the types of travelers. 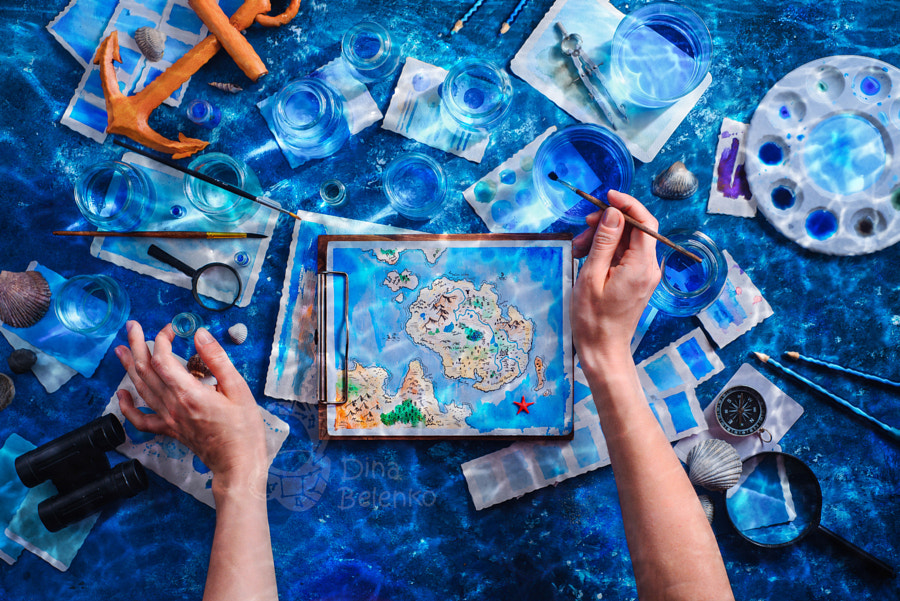 Who leaves their house to venture out into the world?
-A hipster going to the mountains with no Wifi in the vicinity.
-A sailor crossing the equator.
-A grandmother on her way to see her grandchildren.
-A gloomy strider in ragged clothes, with a staff in his hand.
-A group of adventurers: a mage, a thief, and a warrior.
-An entomologist on a field trip. 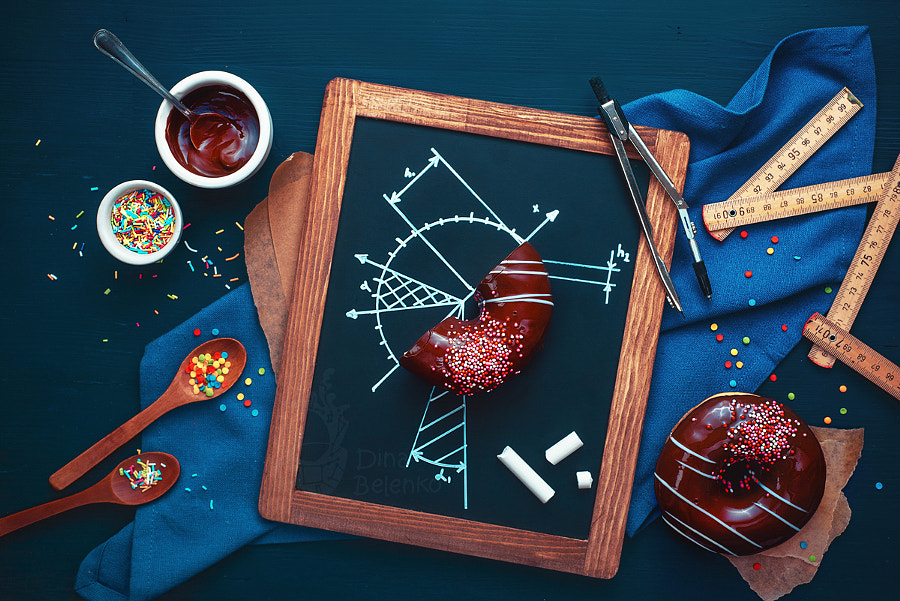 Make a list of at least 15 different types of people that would fit into the character that you chose, and then decide which type you will use for your shot.

Imagine your persona doing some mundane things, something that each and every person does on a daily basis. What does their desk look like? How do they water the flowers? What would their birthday cake look like? 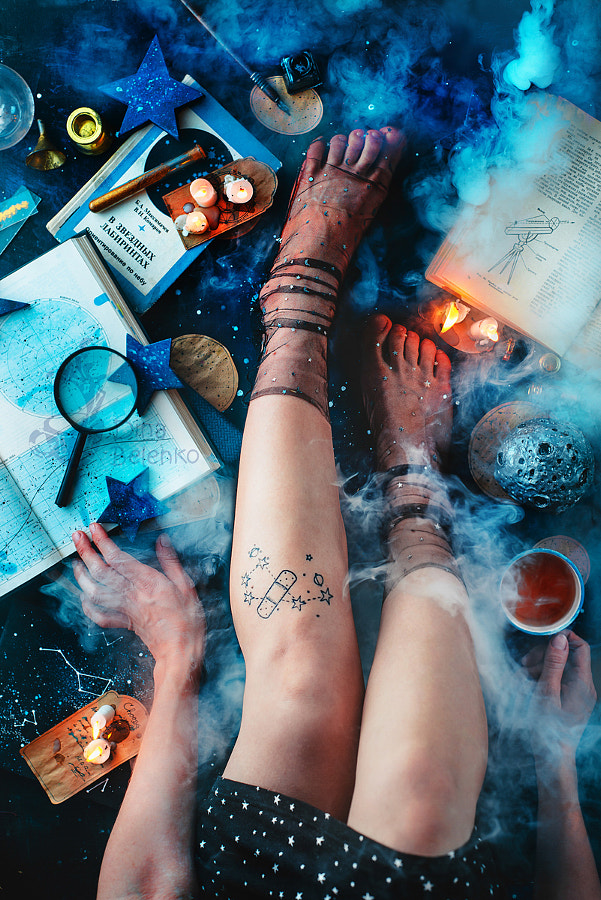 How, for example, do they drink their tea? A painter drinks tea and then accidentally puts their brushes in the cup. An astronomer drinks their tea and sees the stars reflecting in it. A steelworker uses a gas burner to boil the water for their tea. Imagine your person in an ordinary setting and see what happens. 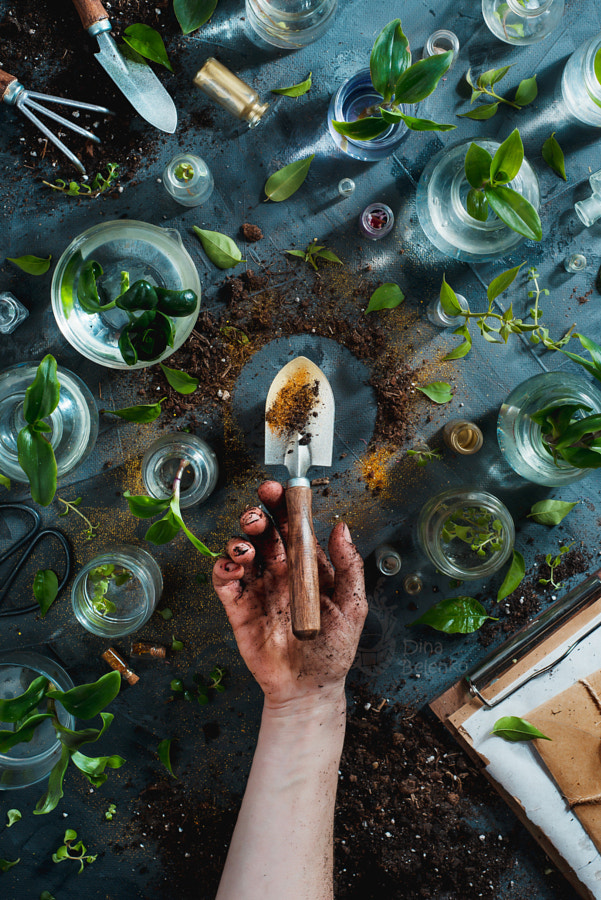 Now let’s get back to our traveler. A tourist might snack on some chips, a lost cowboy on the last piece of horse jerky, a seafarer would gnaw on lemons to prevent scurvy, while a Soviet geologist might struggle to open a can of fish with a knife.

Brainstorm some simple settings and pick the one you can bring to life right now.

Now is the time to ask yourself the most important question: how can we visualize our character? Which items are directly connected to them? 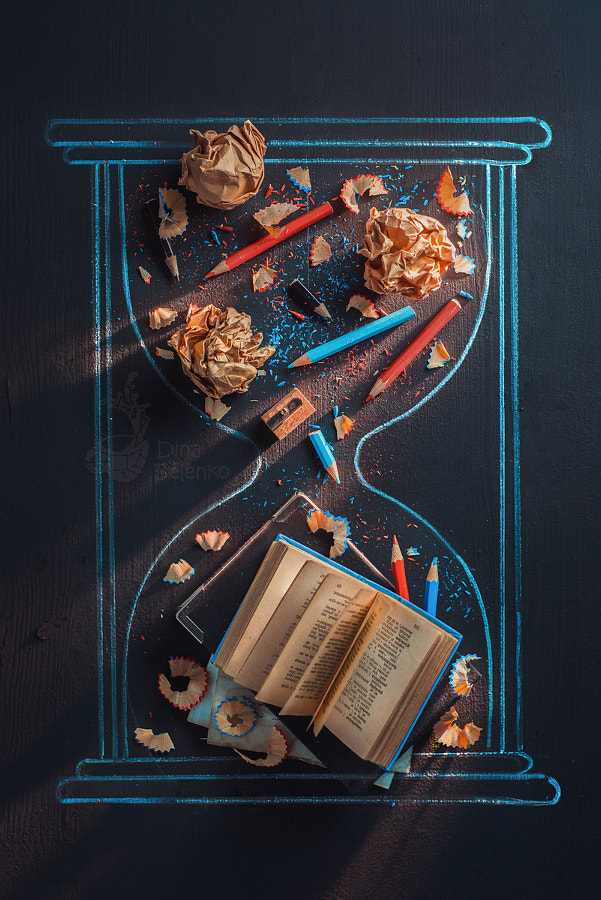 For example, let’s say that I decide to create a still life image that tells the story of a geologist on a field trip. What is typical for geologists? What does a generic geologist look like? When I picture a geologist, I see a bearded bloke in a sweater, holding some mineral samples (and probably, a guitar). He might have a hard hat, a theodolite, and a pickaxe, but these are not the things you can find in every closet. However, a tape measure, pencils, and a notebook with the words “Field research notes”, scrawled across them are much easier to come by. Some stones and small crystals would also come in handy. 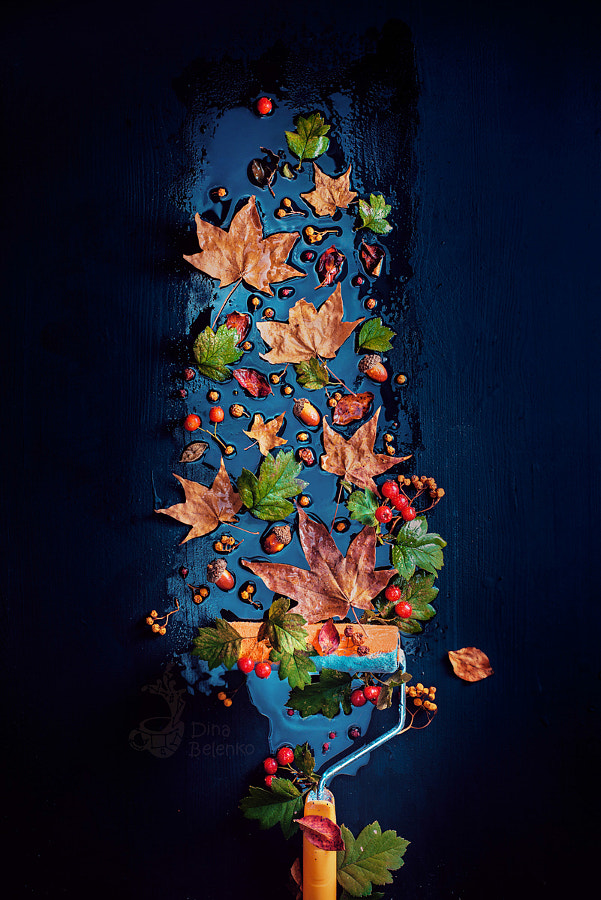 Make a list of all the things that have a connection with your chosen character. What does that person use? What do they wear? What items are related indirectly? (For example, binoculars and a rucksack are not unique to geologists, but they could be carrying such items.) 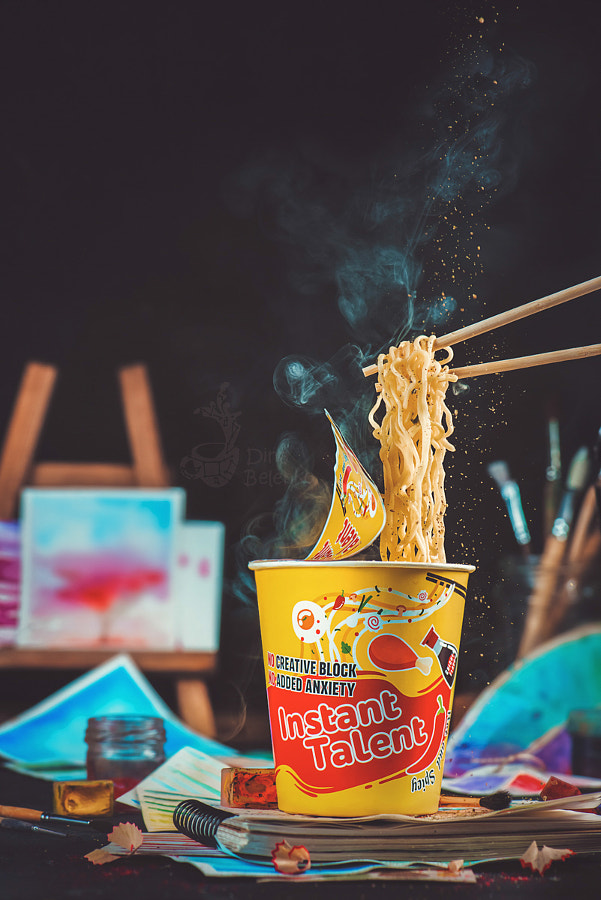 Then, go through the same process with the mundane action of your choice.

My geologist opens his ration. He might be happy to see a chocolate bar inside, or he might have trouble opening a can of meat. 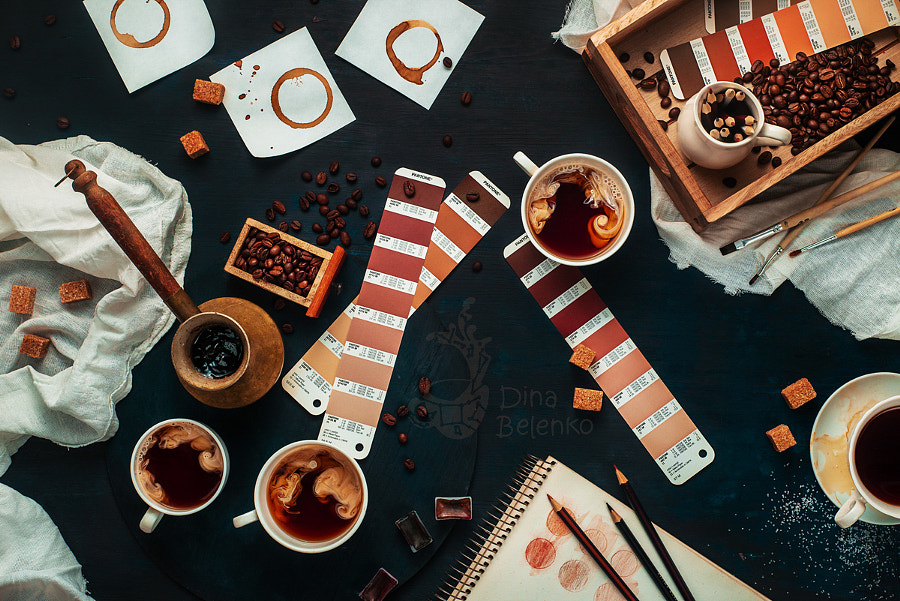 How can we visualize that? What tools do we need? If we’re opening a can, it’s good to have a can opener. Most likely, our geologist lacks proper tools, but he probably has some type of a Swiss army knife with a fork and a spoon attached. Does he have napkins? Does he check his notes while eating? 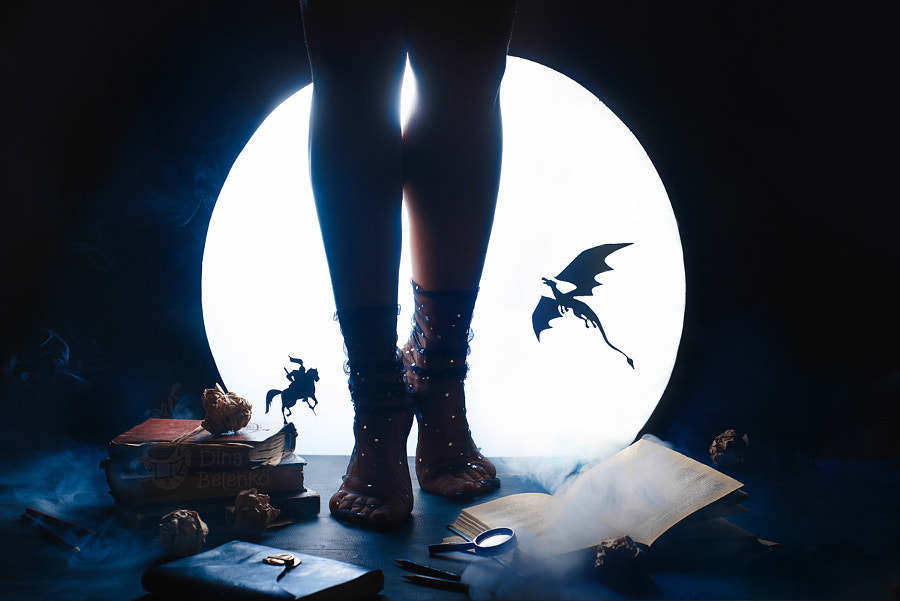 Now it’s time to decide which details to include in your shot, which of them can be obtained easily and which of them are too expensive. 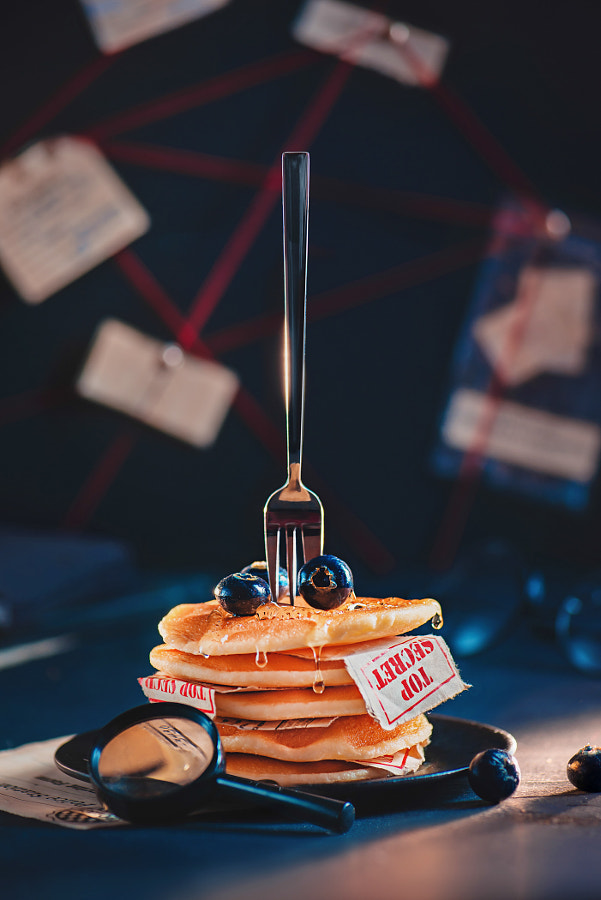 Try to find a couple of props that will work as a direct reference to our character. Keep in mind that it’s better to use one item that is closely related to the topic, rather than multiple indirect ones. 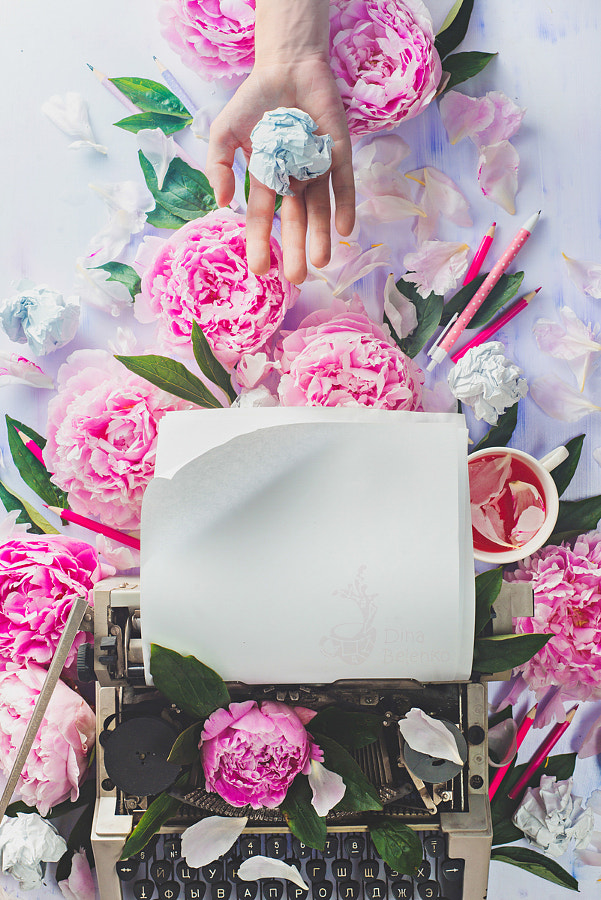 If the composition of your future shot is not yet clear, it’s a good idea to start by placing all the key items in a manner that lets you see all of them together. 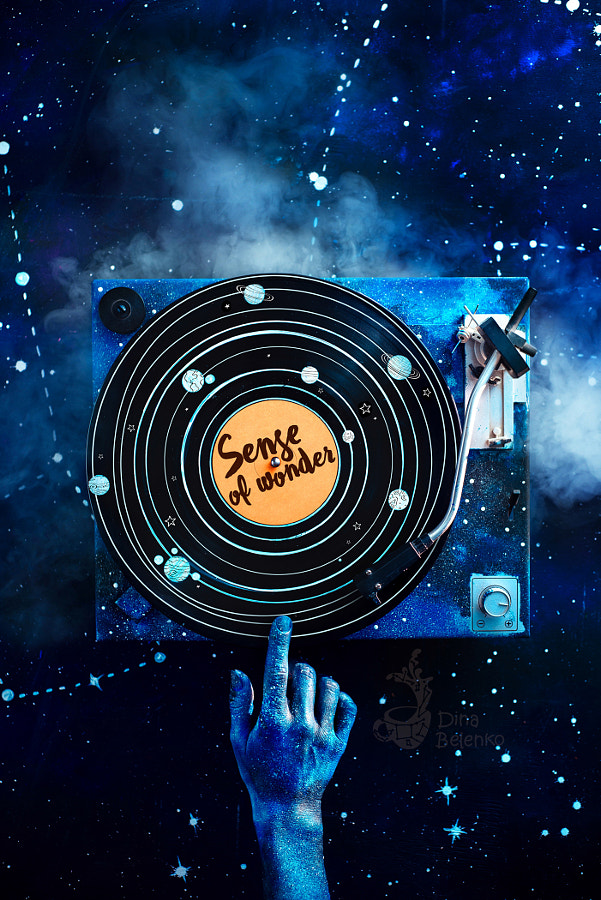 For example, when creating a shot about a geologist, I would first put down a map, then place the unopenable can, and a broken can opener in the middle of it. After that, I would add some notebooks, pencils, and stones to show the occupation of my character. And there you go! 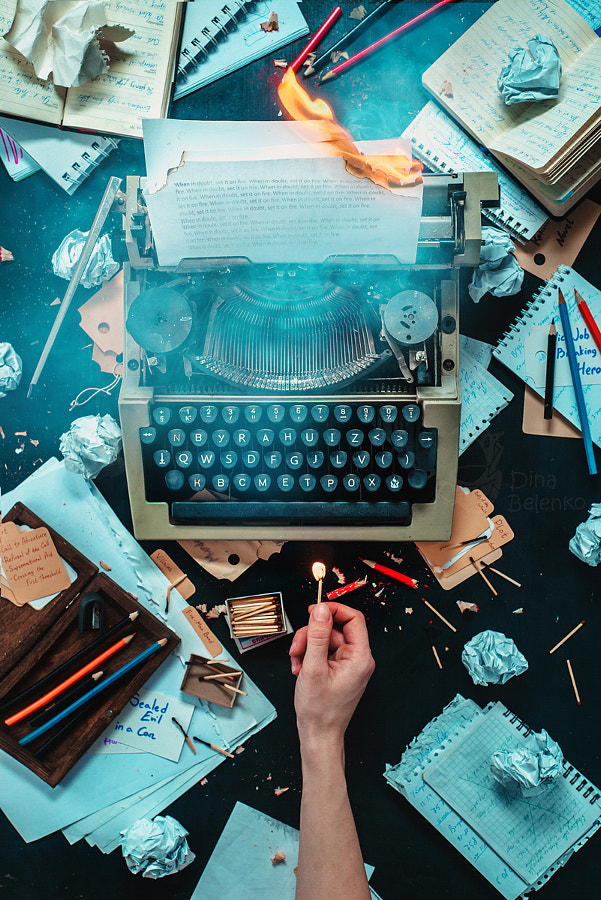 All that remains is adjusting the lights and pressing the shutter button. As a result, you will get a shot that lets you feel a human presence, and that tells a tangible story.

This method is also a great way to bring more life to pictures of food or still life shots, find a different approach to a familiar genre, and experiment with more conceptual work.