While photos of male models were once limited to underwear ads with six-pack abs, the field is changing—for the better. With major brands turning to street-casting and alternative modeling agencies, photographers now have more freedom to experiment with how they portray male individuality and masculinity.

Masculinity is complex and multi-faceted; it means something different for everyone. These days, there’s more to photographing men than the muscle-flexing cliché, and men don’t have to fit a certain mold to steal the spotlight.

Below, we’ll look at just twenty-one versatile male poses to get started with when photographing men. These are all foundational poses, with several possible variations. They come from photo history and the worlds of fashion and portraiture, but they’re also modern and fresh.

Add variety by shooting these poses in vertical and horizontal formats; get close for detail shots, and then move away for full-body shots. Have your model move his head toward and away from the camera to see what works; even slight shifts can have a significant effect.

It’s also important to note that these poses are by no means reserved for men only. They’ll work with women, non-binary, genderqueer, two-spirited individuals, and more. We chose these poses because they can be vehicles for expressing masculinity in many different forms. They are meant to broaden your horizons—not limit them.

One of the first questions new models ask is, “What should I do with my hands?” The classic hands-in-pockets pose is one way to solve this problem. You can have one hand or both hands in the pockets, depending on the look you want, but make sure the thumb is hooked outside the pocket. That way, the hands won’t look like they’re disappearing or cropped. Of course, this pose can also be combined with other poses on this list for tons of variety. 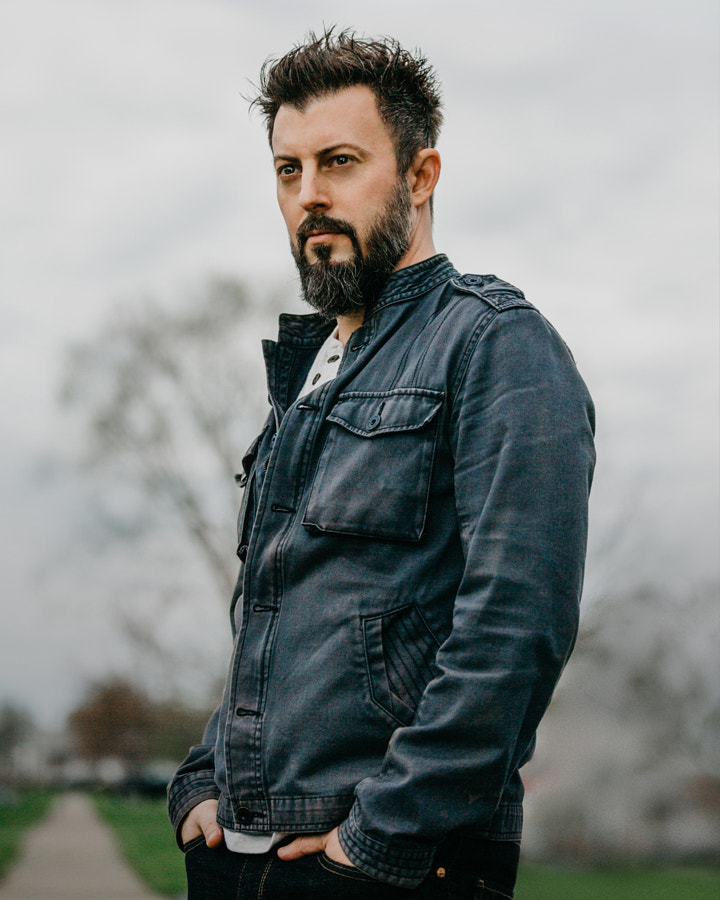 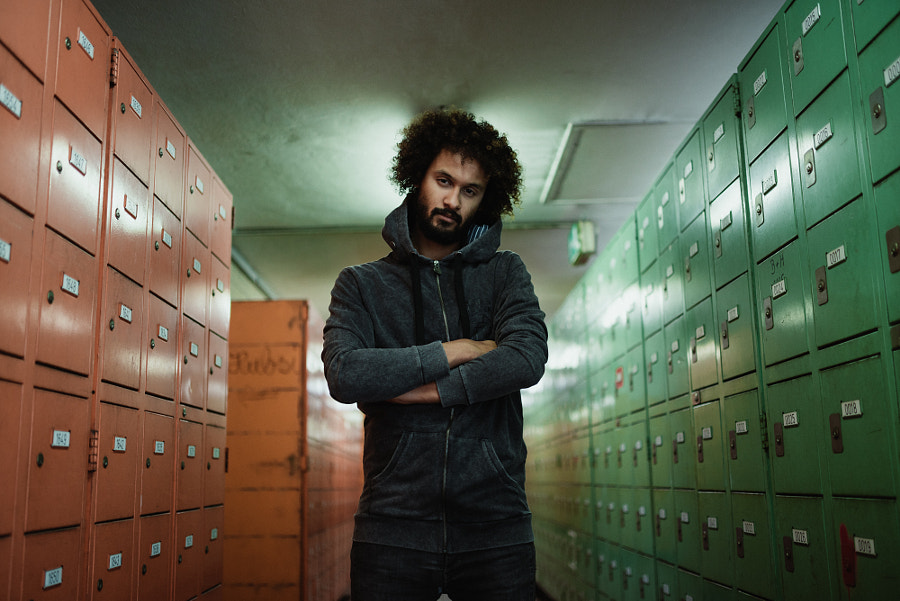 You know this one; it’s the pose you’ll find on professional directories and profile pages the world over. It’s also easy and simple, especially for men who might not be used to posing professionally. Depending on the facial expression, this pose can evoke all sorts of moods, from businesslike to edgy and non-conforming. Like the hands-in-pockets pose, this one can be combined with several others, so feel free to try it out in different situations. 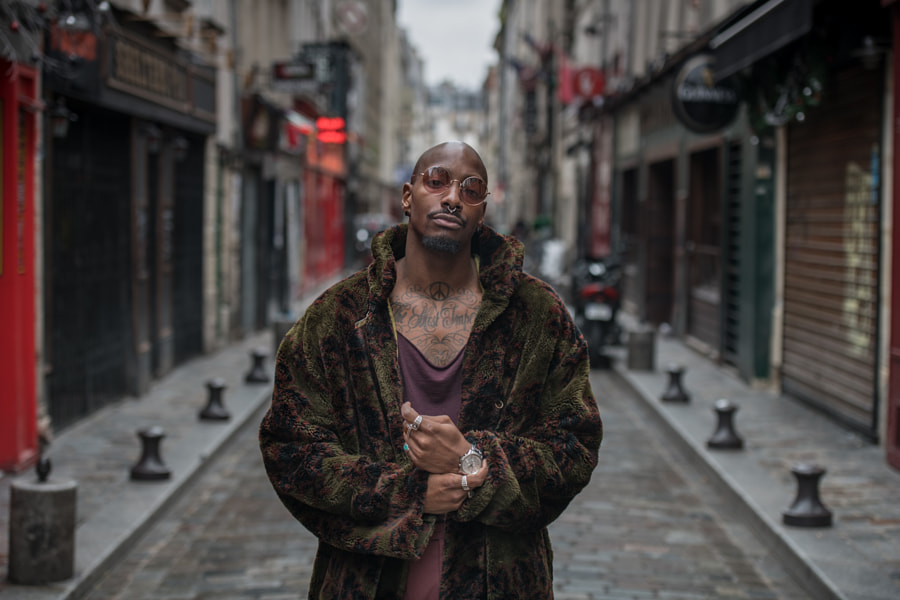 We’re not talking about a literal wardrobe adjustment here but something more subtle. To give your model something to do with his hands, have him roll up his sleeves, adjust his cufflinks, fix his tie, pop his collar, or touch his watch or cap. Another popular one? Holding the labels of his suit with his hands. For fashion photographers, this pose serves two purposes; first, it helps create a relaxed, casual atmosphere, and second, it draws attention to the details of the outfit. 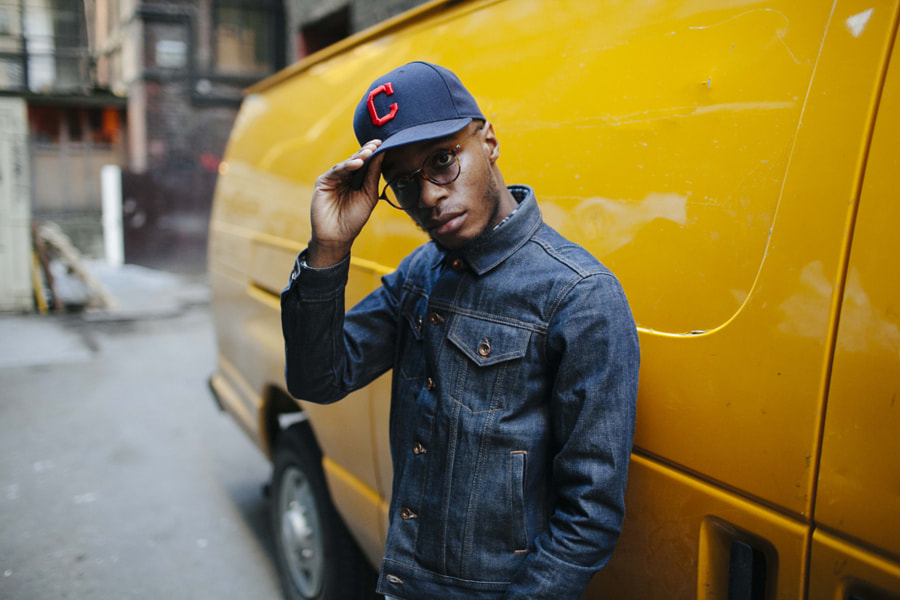 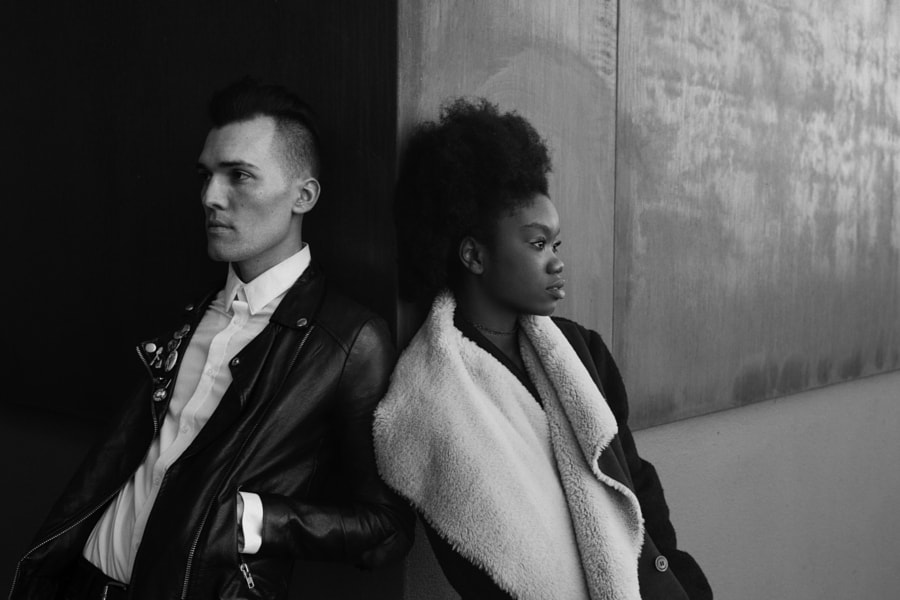 For a relaxed, expressive portrait, have your model lean against a wall. You can have him lean to the side or straight back. You can also ask him to lift one leg and push it against the wall for a casual vibe. Feel free to experiment with angles here, as walls give you lots of options for bent limbs and sculptural compositions. 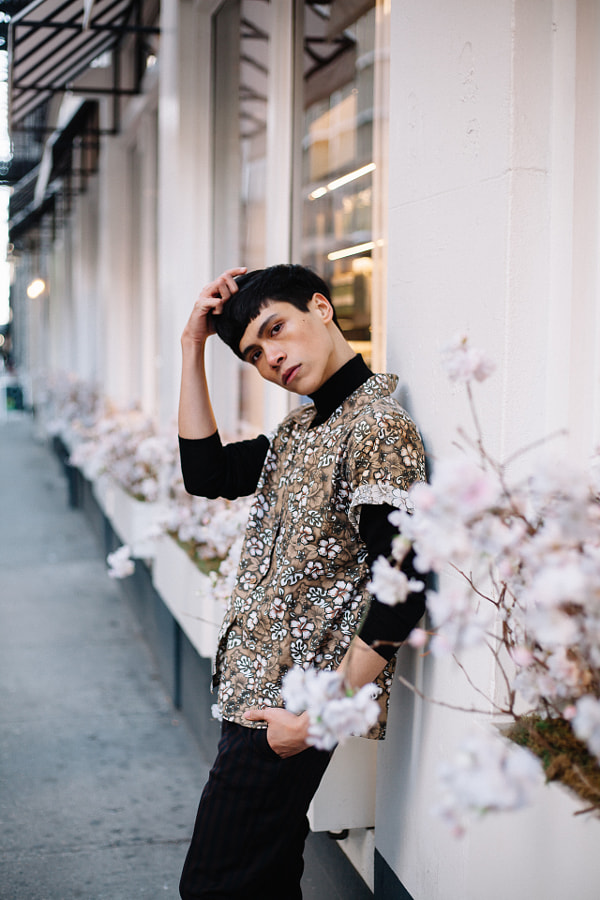 This one isn’t a single pose but several! Try out different perspectives, and invite your model to look at the camera, and away from it, for some variety. 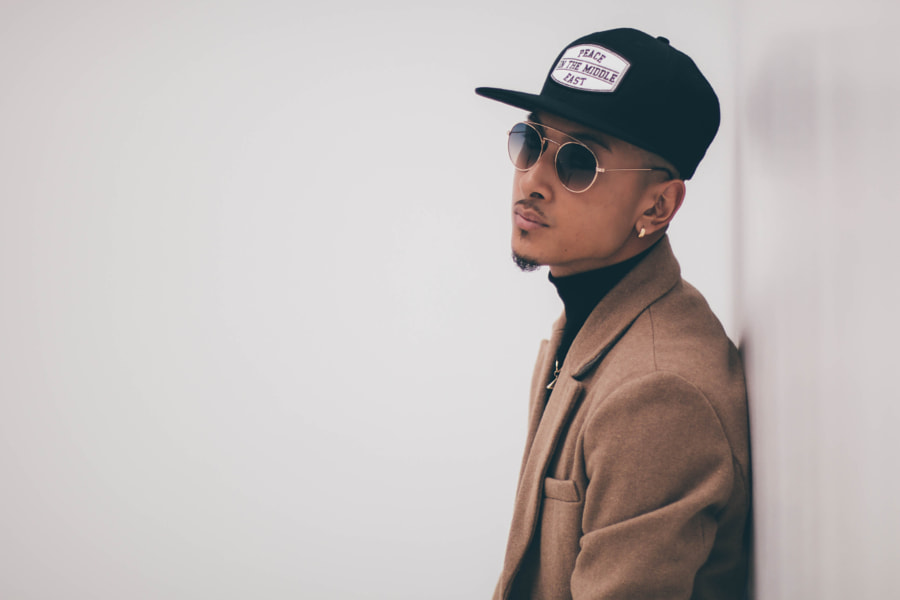 This technique was also a favorite of the legendary fashion photographer and portraitist Irving Penn, who sometimes used moving walls while posing his subjects. In the case of Truman Capote and Marcel Duchamp, he included walls on either side of the body, so feel free to get creative. 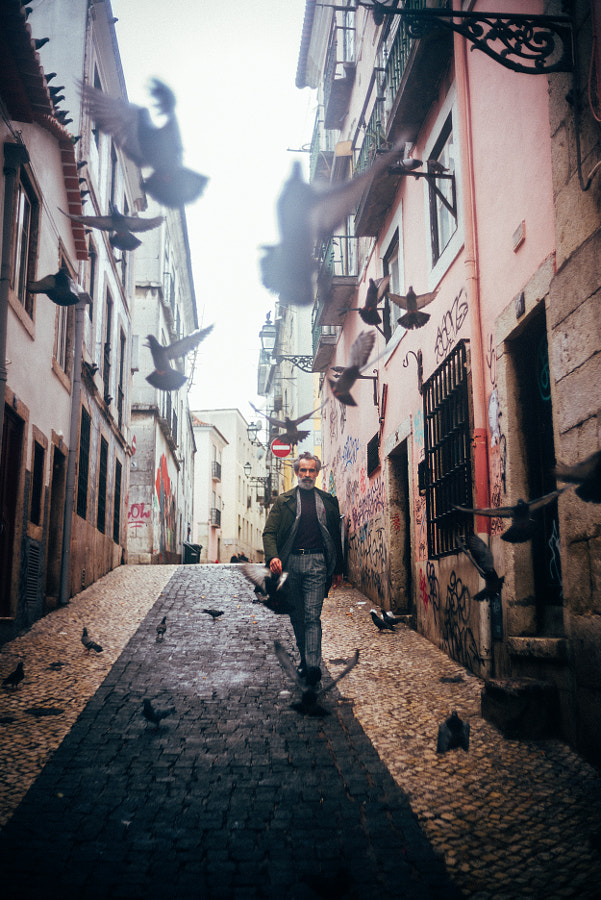 If your model’s having trouble loosening up in front of the camera, have them walk towards you from a distance. That sense of movement will make for dynamic images and get rid of any stiffness your subject might need to shake off before getting into other poses. 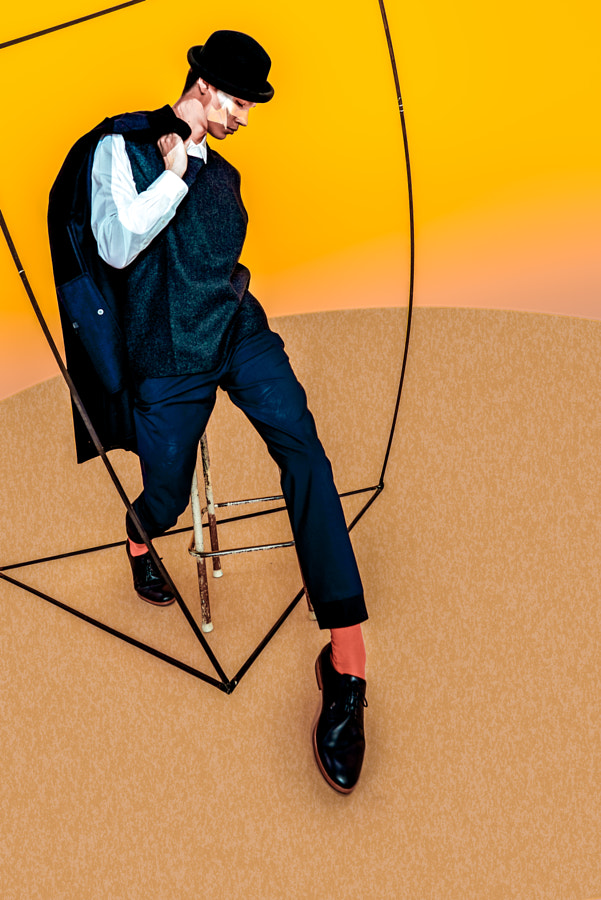 You’ll find this pose in fashion magazines and editorials, and it works with a model who’s standing still or moving. For a “nonchalant,” casual-cool vibe, have your subject use one hand to drape his jacket or sweater over his shoulder; if he’s walking, you can get some nice flowing or billowing clothing at the same time. 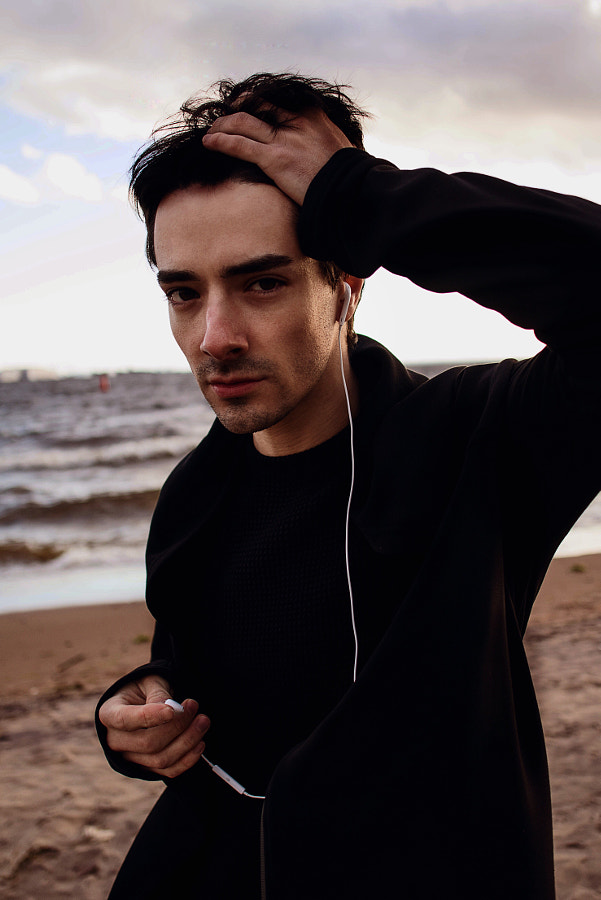 Have your model run his fingers through his hair for a relaxed, spontaneous feeling. You can also ask him to move his arm down and place his hand on the back of his neck for a similar yet distinct pose. These are two favorites among fashion photographers, and you’ll find them across ads and editorials worldwide. 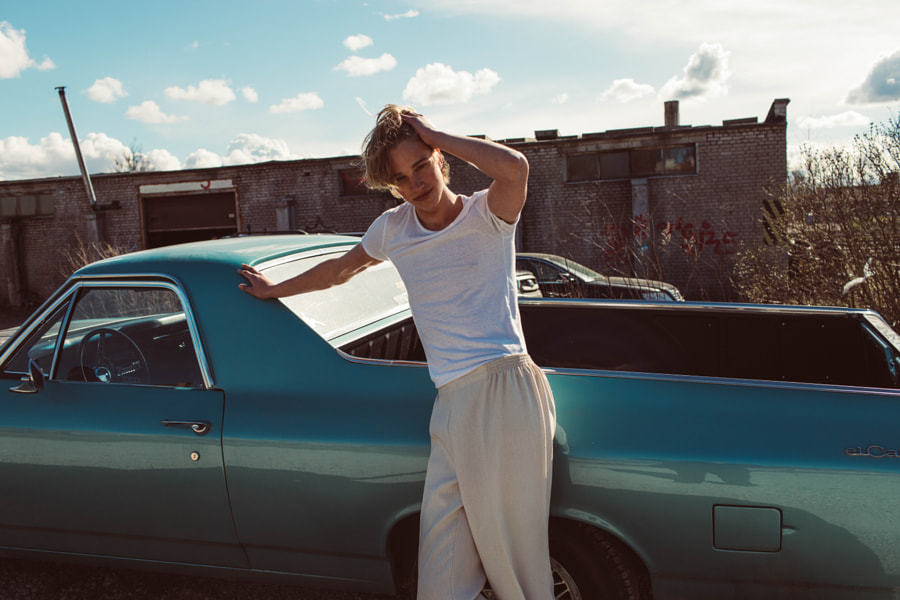 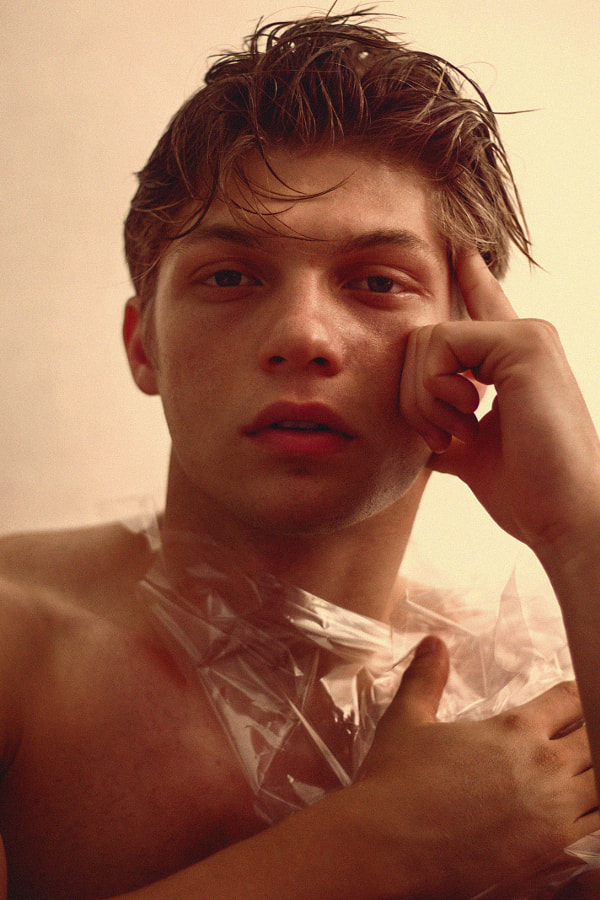 This versatile pose can be used to express introspection and vulnerability, self-confidence and poise, and everything in between. Simply ask your model to place one hand on the opposite shoulder or chest. This easy movement will create interesting lines and angles—plus an added layer of depth. You can also have him hold onto something, like an article of clothing. 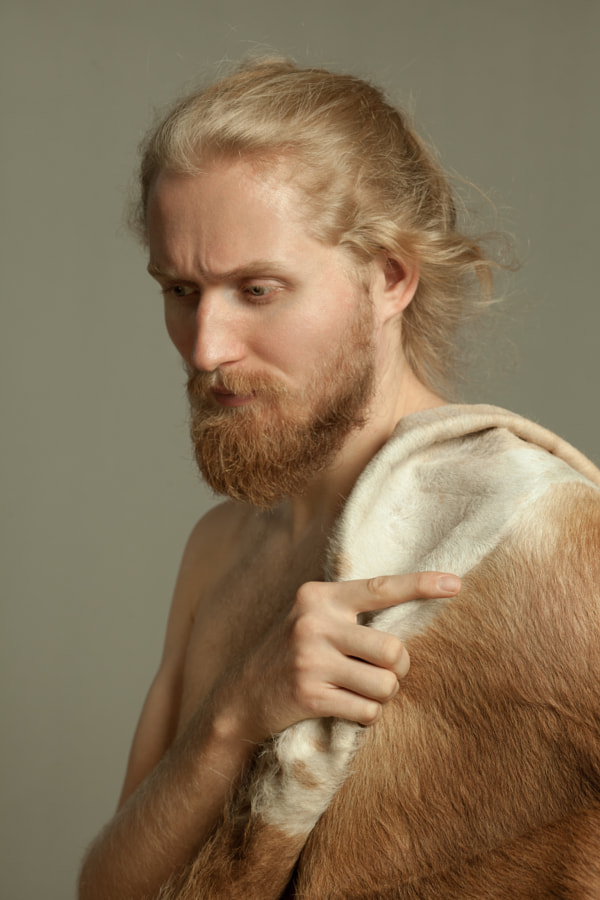 Meaning “counterpose” in Italian, this is a pose that borrows heavily from art history, with one of the most famous examples being Michelangelo’s David. To achieve this pose, ask your model to lean his body weight on one straightened leg, bending the other leg and letting his upper body twist slightly off-axis from the hips for an asymmetrical but balanced look. Unlike standing straight, the contrapposto pose conveys dynamism and liveliness; recent studies even suggest that it could make us look more attractive. The hand-on-hip pose is usually associated with women, but like any pose, gender stereotypes need not apply, and it can work just as well for men.

Just think of Yousuf Karsh’s indelible photo of Winston Churchill, where the Prime Minister stands with one hand on his hip and the other on the back of a chair. It’s the portrait of a lifetime, and it’s not just that incredible facial expression that made it unforgettable—though that certainly helped.

To get the look, make sure you’re positioned slightly below your subject’s eye level. Another hint for an authoritative expression? Follow Karsh’s lead and go for a furrowed brow and narrow eyes, rather than wide-open ones. 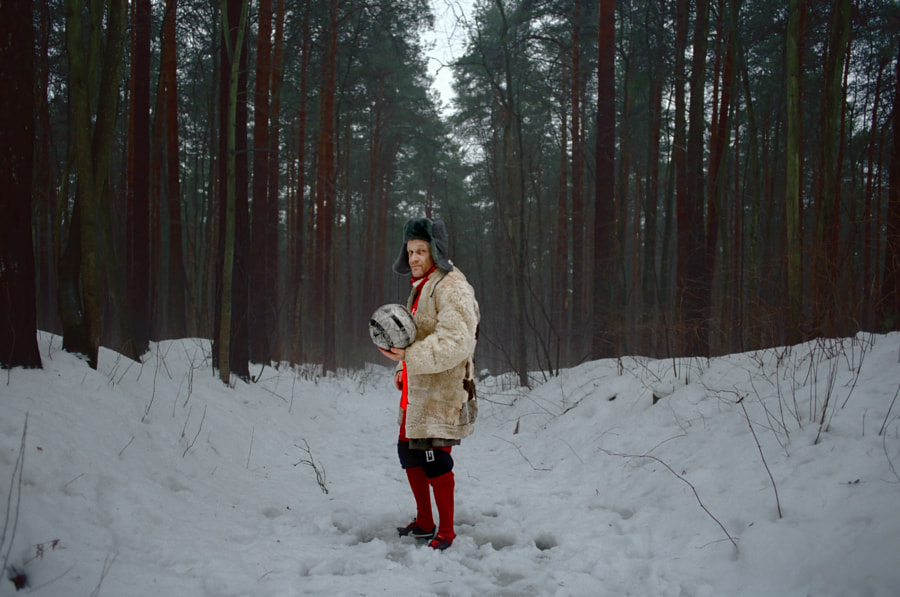 Props can work wonders, but they have to make sense within the context of your photoshoot. That is to say, they should help tell the story of the person you’re photographing, rather than distract attention away from him. It can help to ask your model to bring an object of personal significance on set; not only will this prop help make him feel more comfortable, but it’ll also help prompt new pose ideas. 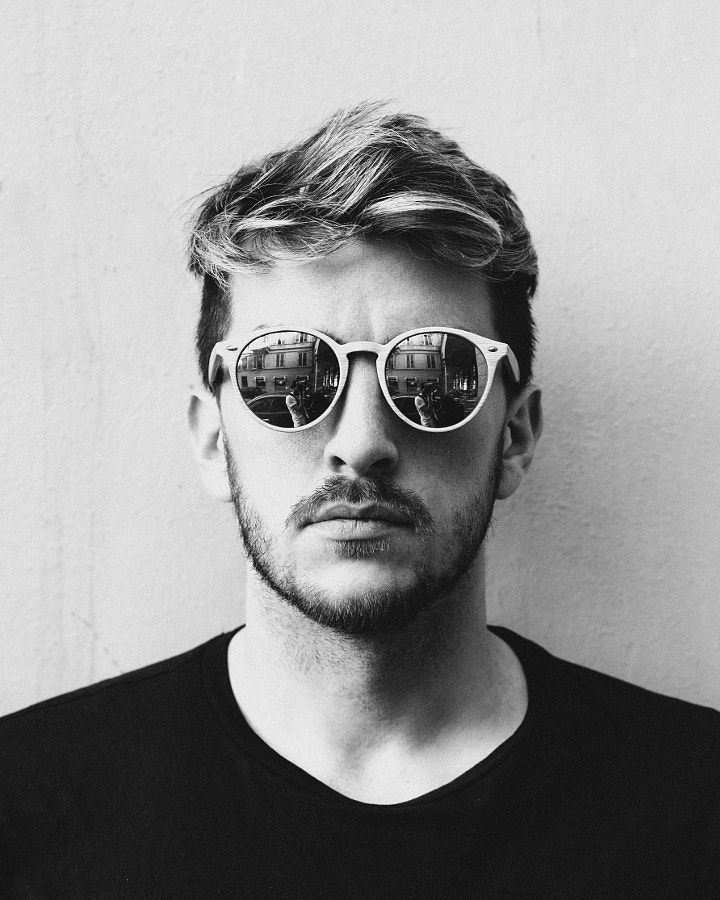 Historically, portraits of men have trended towards hard lighting and contrast, which is great if you want to accentuate the jawline. In this case, remember to ask your model to jut his chin forward and down, as this position will result in that nice strong shadow on the neck. That’s not to say that you can’t use softer light; there are no rules here. Traditionally used for portraits of women, soft light can produce beautifully dreamy, ethereal pictures of men as well; it just won’t accentuate that jawline in the same way. 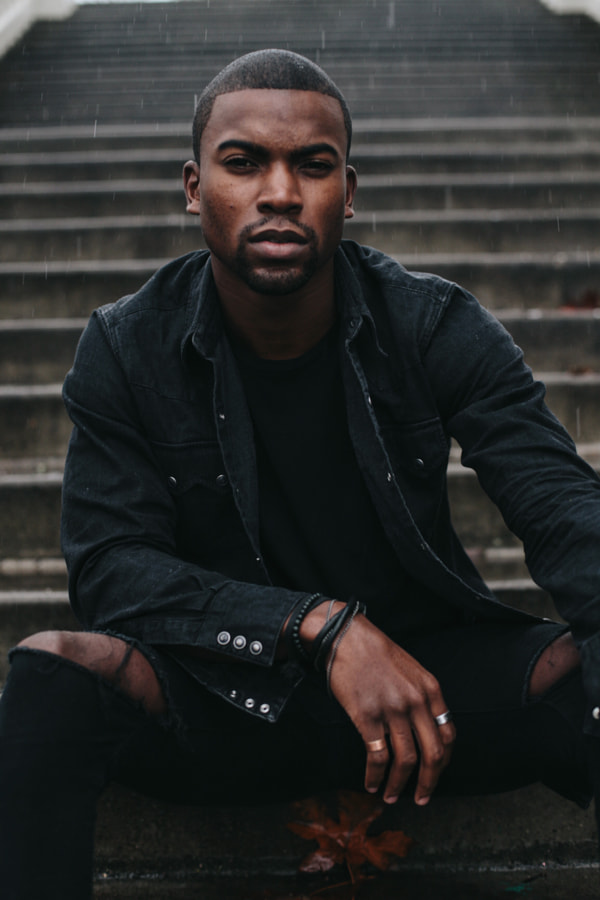 Not to be confused with “the lean,” this pose occurs when the model is sitting, with his arms on his knees. If you want to make it a classic “power shot,” position your camera just slightly below the subject’s eye level. 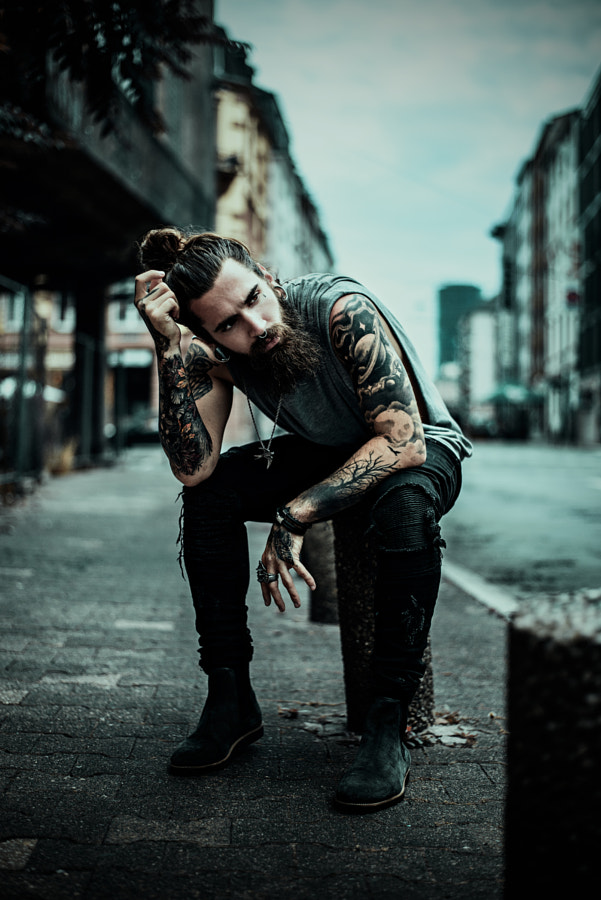 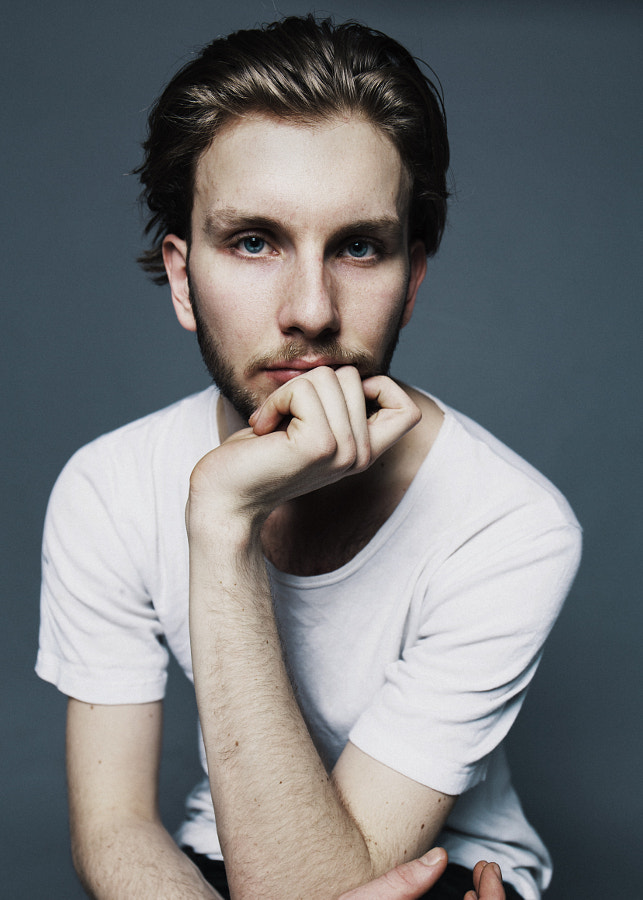 We borrowed the name of this pose from the famous sculpture by Auguste Rodin, but it can also be traced throughout photo history; one photographer, Alvin Langdon Coburn, even modeled a portrait of George Bernard Shaw after the sculpture itself. In this pose, the model is seated, with his chin on his hand and elbow on his knee. It’s a pose associated with thoughtfulness and heroism, so it works well for serious portraits. 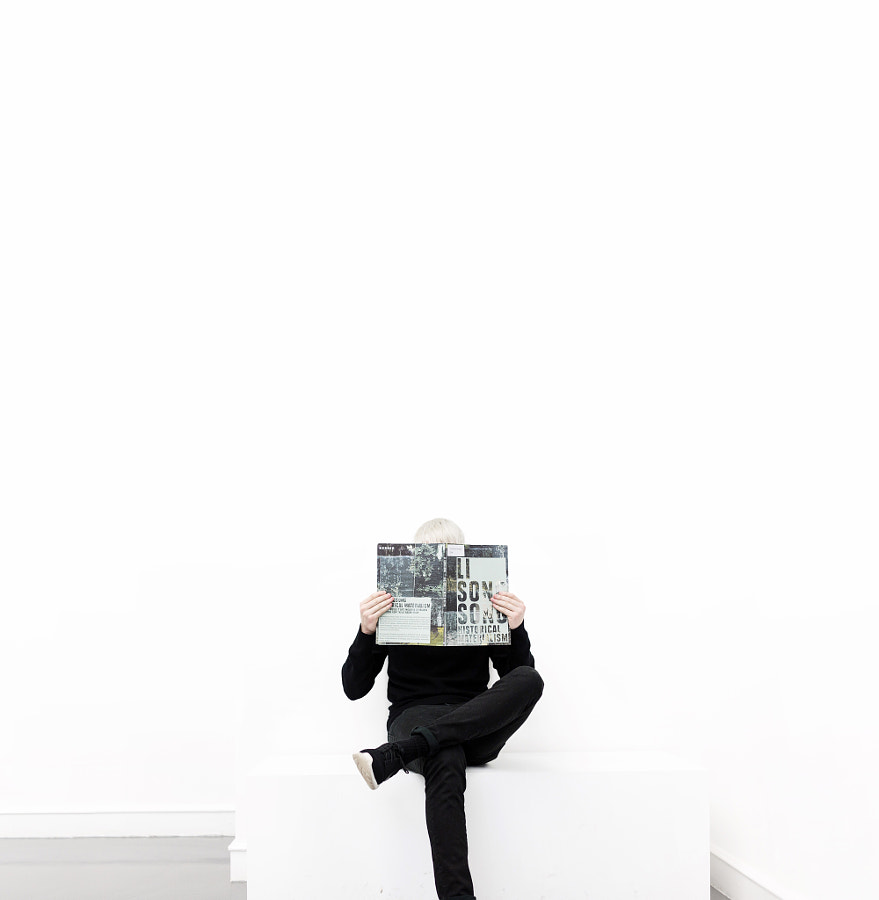 Crossing your model’s legs can add dynamics and a sense of movement to almost any photo, no matter the pose. Still, one of the most common leg-cross poses you’ll find includes a seated model with the ankle of one foot resting on the knee of the other. This pose can be done on a chair, bench, or sofa for a natural, candid feel. 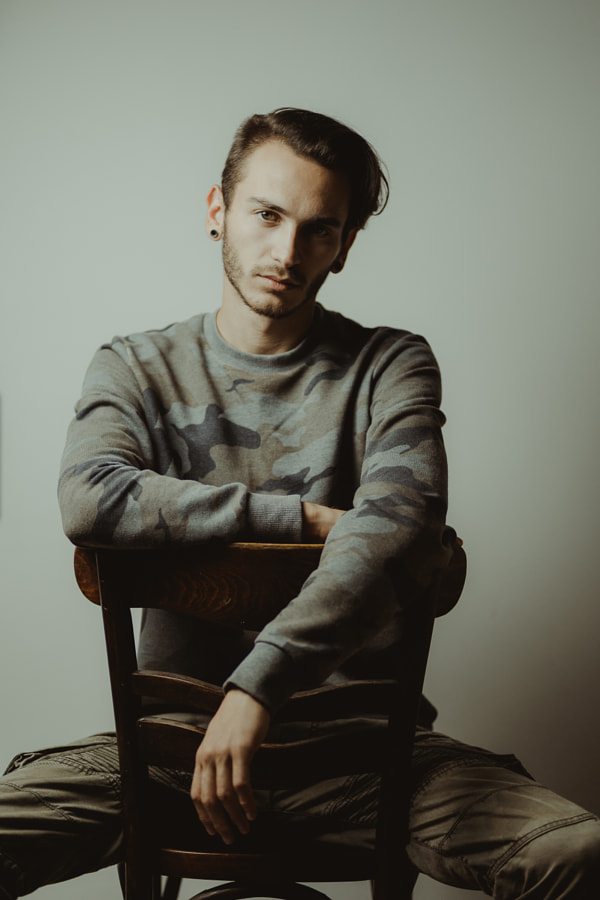 This classic pose can be found everywhere from senior portraits to album covers (think: Lionel Richie in Can’t Slow Down or Johnny Mathis in Feelings). It works well because it conveys the same sense of self-assurance as the “lean-in” while also giving you some added versatility. Have your subject lean onto the back of the chair or rest his hands there for a cool, casual sensibility. 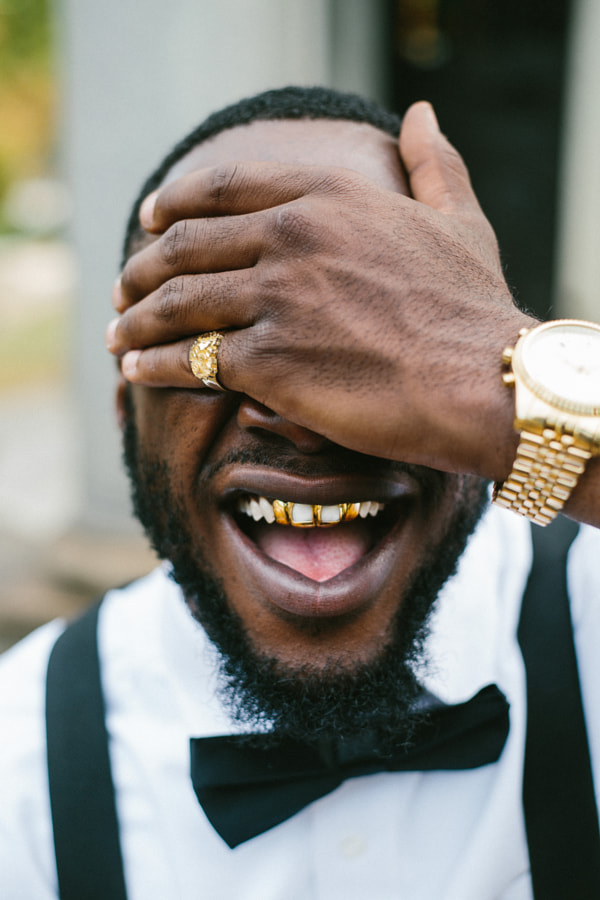 Use the position of your model’s hands to direct the eye, and play with hiding and revealing different portions of the face. A touch can be used to demonstrate strength, vulnerability, or both. A hand to the chin, as in Albert Watson’s iconic photo of Steve Jobs, will tell a different story than a gentle hand on the cheek, so check in to see what your model likes and go from there. Asking your subject to touch his face can also result in candid, natural facial expressions that are difficult to “fake.” 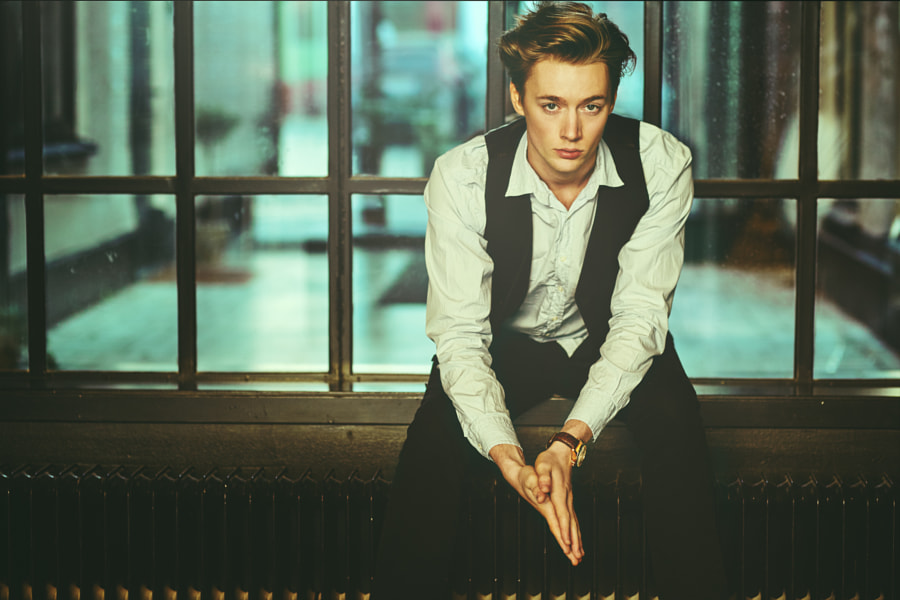 This pose, usually executed when the model is sitting, can exude humbleness and approachability. As with the “lean-in,” you’ll have your model place his elbows on his knees—only this time, you’ll ask him to join his hands. You can also do it standing up, if your subject is leaning on something like a railing. 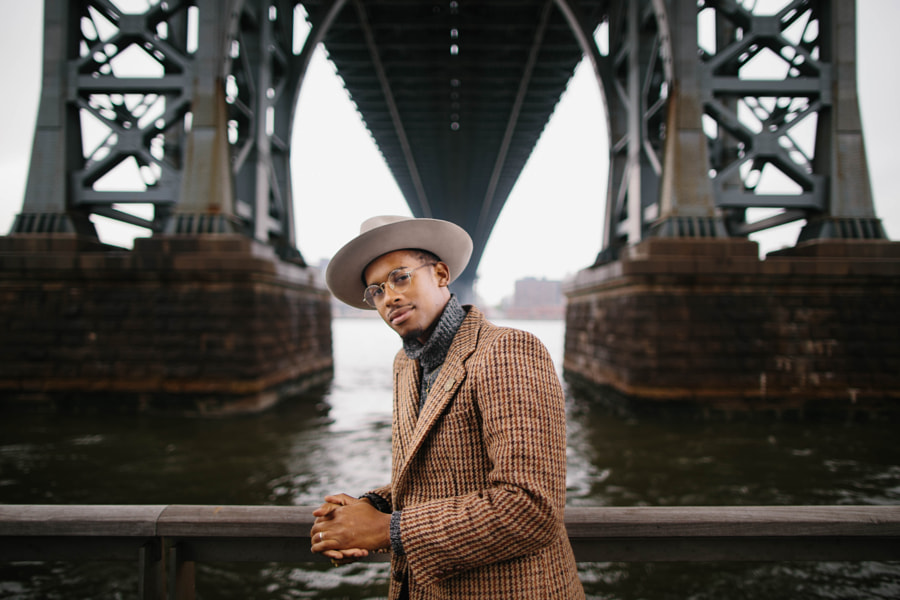 You can also use this time to get some close-ups of the hands, which can often help tell someone’s story even better than the face. Your model can also draw attention to any rings or tattoos he might have. 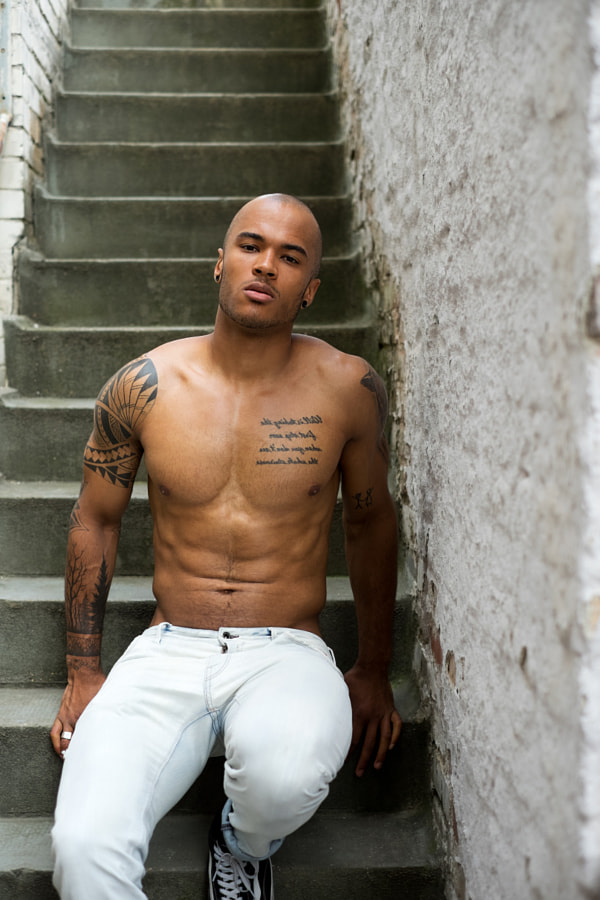 Stairs are perfect for portrait and fashion shoots because they allow for different levels and perspectives. Have your model sit on one step and place his feet on two different steps; having those layers will give your photo more depth and interest. 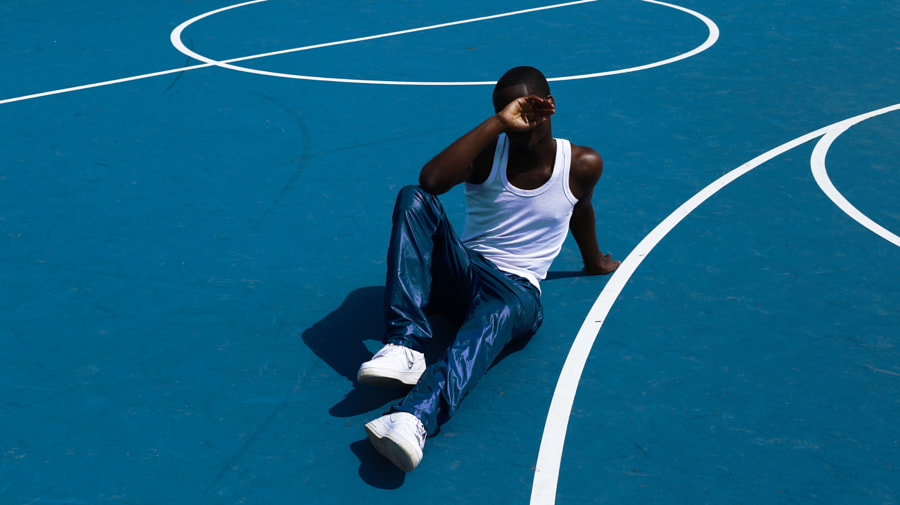 There are tons of “leaning-back” poses to try, but for now, we’ll keep it simple. Have your model lean back, with at least one of his arms behind him, propping him up. He can also place his elbows on the floor, rather than his palms, but it works both ways.

Like many of the poses on this list, this one comes off as relaxed and comfortable, giving your photos an authentic and spontaneous vibe. He can lean back on both hands or leave one free and move it around. He can cross his legs for an added point of interest, or he can bend one leg and extend the other—your call. 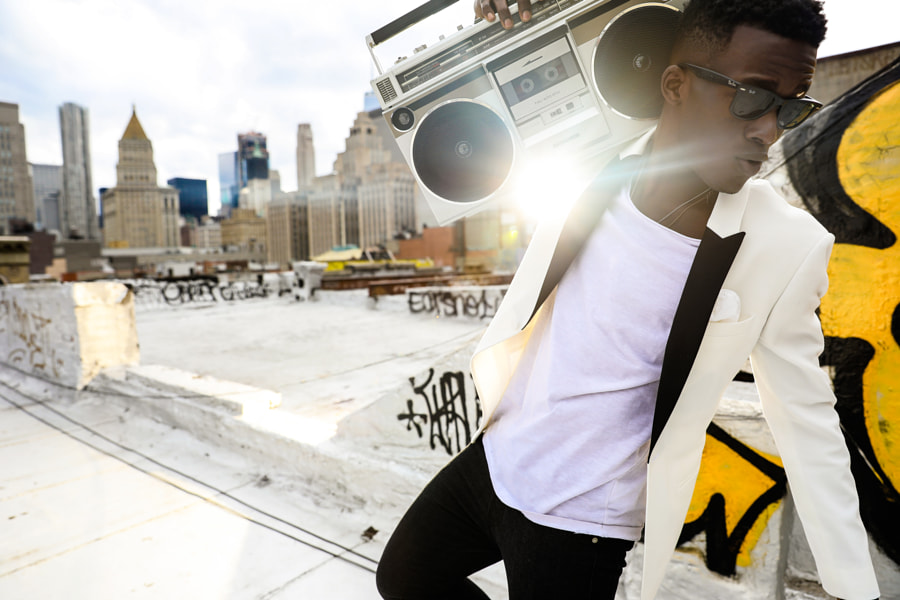 This isn’t a pose per se, but it’s just as important as any conventional pose. The “in-between” refers to the natural poses your model makes when he’s in between formal poses; it could be as simple as turning over his shoulder to look at you or dancing to the music when he thinks you aren’t shooting.

The breaks between traditional “poses” are all opportunities to grab some candid, off-the-cuff poses and gestures that are unique to your model. These are the poses that can’t be planned or choreographed, so take advantage of these moments.

These poses are just a starting point, and we recommend staying open to improvisation on set. There are hundreds if not thousands of other poses to explore, so we’ve barely scratched the surface here. Your approach will also vary based on the person you’re photographing—what works for one face and personality might not work for another.

Take the time to get to know your model and understand what he wants from the session, and remember to provide encouragement and feedback throughout the shoot. Posing and direction should always be positive and fun.

The post 21 poses to try when photographing men appeared first on 500px.