Last year, the Nevada Museum of Art hosted a major retrospective exhibition of the late photographer Anne Brigman (1869-1950), whom many consider to have been a feminist artist in a time before “feminism” was even a word.

In the early 1900s, then in her thirties, she ventured into the Sierra Nevada wilderness, where she created nude photographs and nude portraits–many of them self-portraits of herself and her sisters in a rugged, natural landscape. For a woman at the turn of the century, it was a bold and subversive move; many call it revolutionary.

It’s been more than a century since Brigman created some of her most nude photographs, but for decades, she remained largely in the shadows. Her relative obscurity comes into even sharper focus when compared to the successes of male photographers like Edward Weston, who famously photographed his muse, Charis Wilson, in the nude.

The history of nude photography has, at least to some extent, left out the female perspective–both as photographers and models. But in overlooking the women who’ve helped shape this genre, we miss out on half of the story. It’s past time we gave them the attention they deserve. 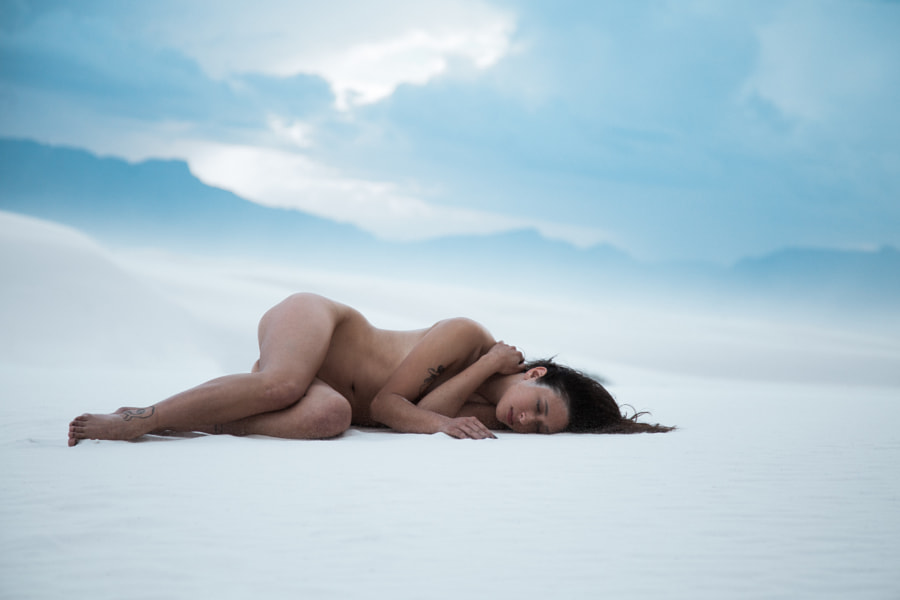 Right now, female photographers like Lauren Naylor, Gracie Hagan,, and Natalia Mukha, all members of the 500px community, are reclaiming nude fine art photography for themselves in striking and surprising ways. In a vein similar to Brigman, Lauren got her start with nude self-portraits. Sometimes, she too incorporates the landscape and natural details, recalling scenes from the Garden of Eden and a time before time. 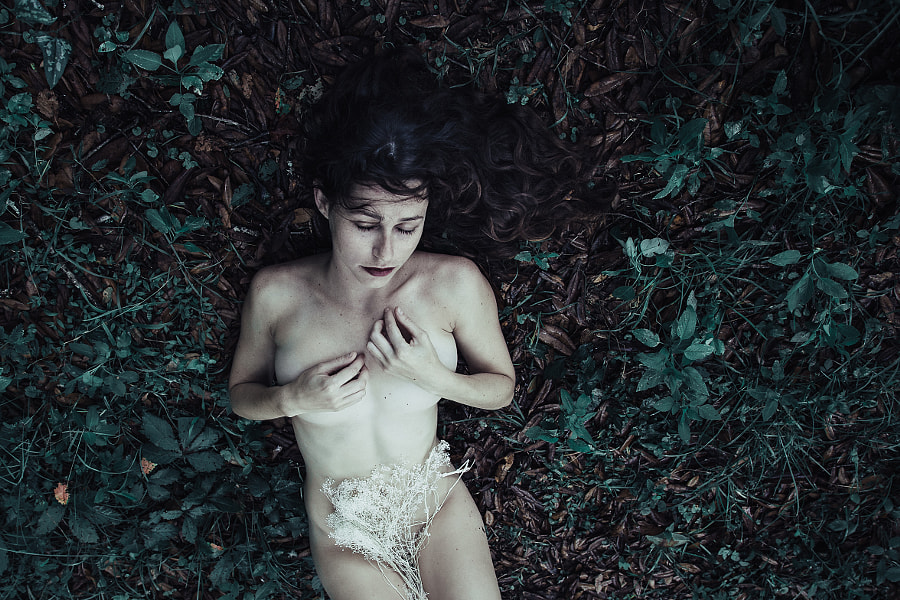 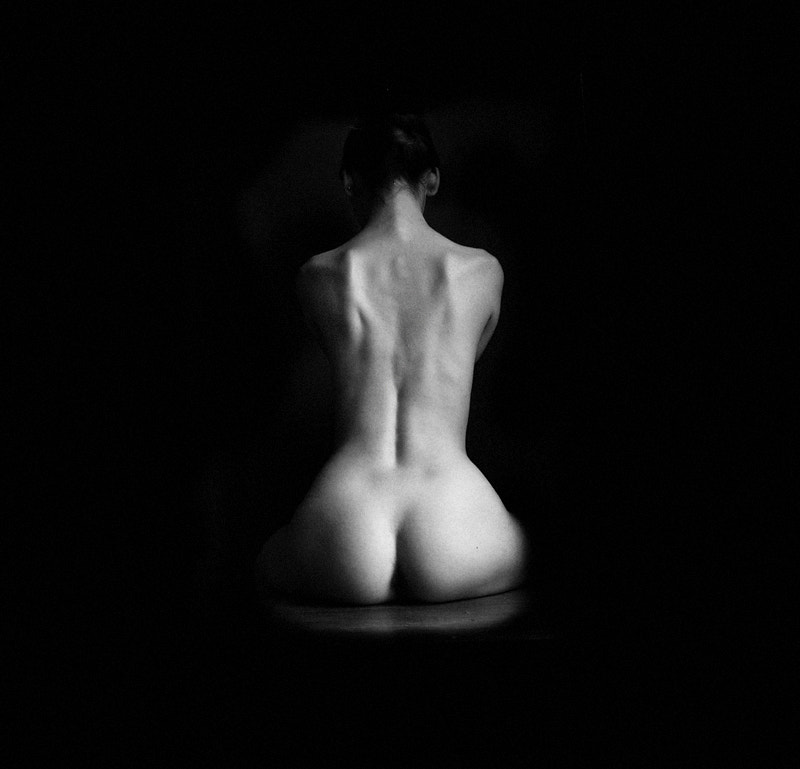 Natalia also has deep roots in the history of fine art nude photography. She has a background in creating handmade silver prints, and her experience shows, especially in her monochrome work. Using rich blacks, bright whites, and dynamic grays, she–like Edward Weston–uses light like a “chisel,” sculpting the human body before our eyes. 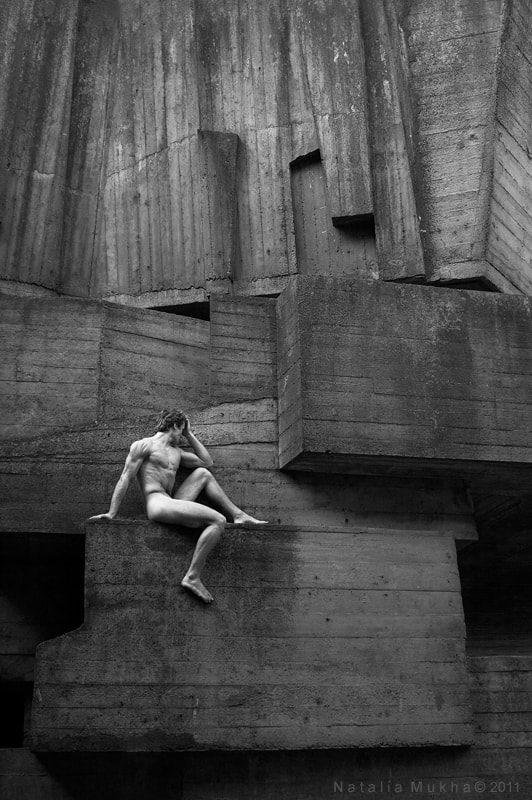 Notably, she’s not limited to the female body in her nude photography, as she highlights the beauty of the male form and other body types 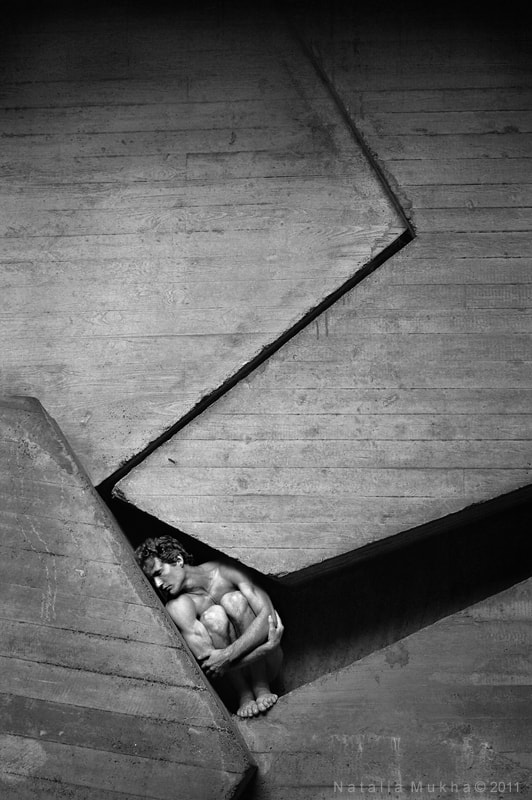 Gracie, who’s mastered digital and analog techniques, has a standout collection of Polaroid nude photographs. Decades ago, Robert Mapplethorpe used similar film packs for his own nude photography, perhaps because of the privacy they offered (no need to take his photos to the lab), but Gracie’s use of instant film feels less practical and more deliberate.

The film lends her nude photography a dreamy and nostalgic atmosphere, and they also remind us of the kinds of photos individuals might have taken of themselves in the past, outside of a studio setting and without the pressures of “the male gaze.”

Read on for Lauren’s firsthand account of venturing into fine art nude photography, plus some of our tips for setting up a nude photoshoot of your own.

Lauren Naylor: “When you think about nude photography, you might be a little wary on the subject—maybe you’re picturing some amateur photographer promising artistic integrity with less-than-refined ideas floating around in their head. At least that was my opinion on most contemporary nude photographers when I first started doing photography, nearly 9 years ago, with a narrow mind and an old 35mm camera. 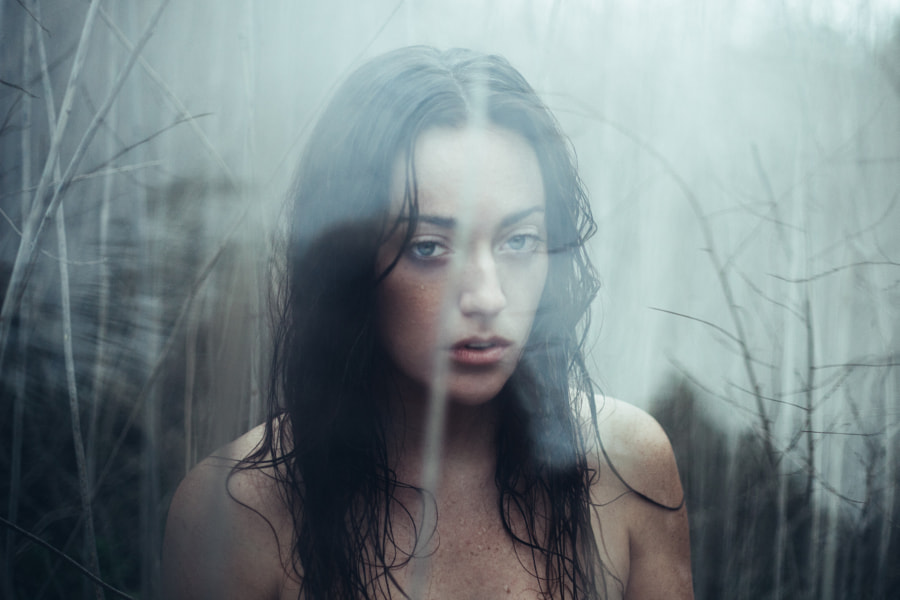 “I would have never thought back then, shooting double exposures of clouds and street signs, that I would be shooting nude photos of women, and definitely not of myself, in the present day. I had admired the work of Helmut Newton and Edward Weston (and still do!), but thought those good old days of ‘nude vs. naked’ were long gone and all that was left were hidden motives.

“After learning the photography basics and becoming bored of the double exposures, I slowly started trying on fine art portraiture and grew to fall deeply in love with it. My portraits took on many styles in the early years, as all developing photographers come to terms with that difficult question, “What the hell do I want to shoot and how do I create a body of work that is my o?wn?? 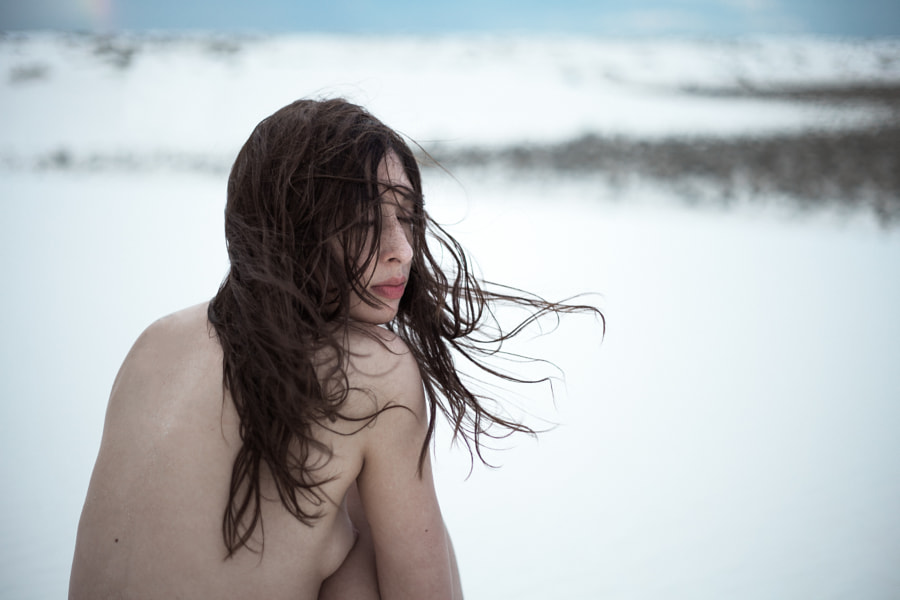 “It wasn’t until a few years ago that I started to feel like I had found my niche in photography, and a personal style began to develop. That sigh of relief had finally hit me: I was working towards something I truly loved and believed in. 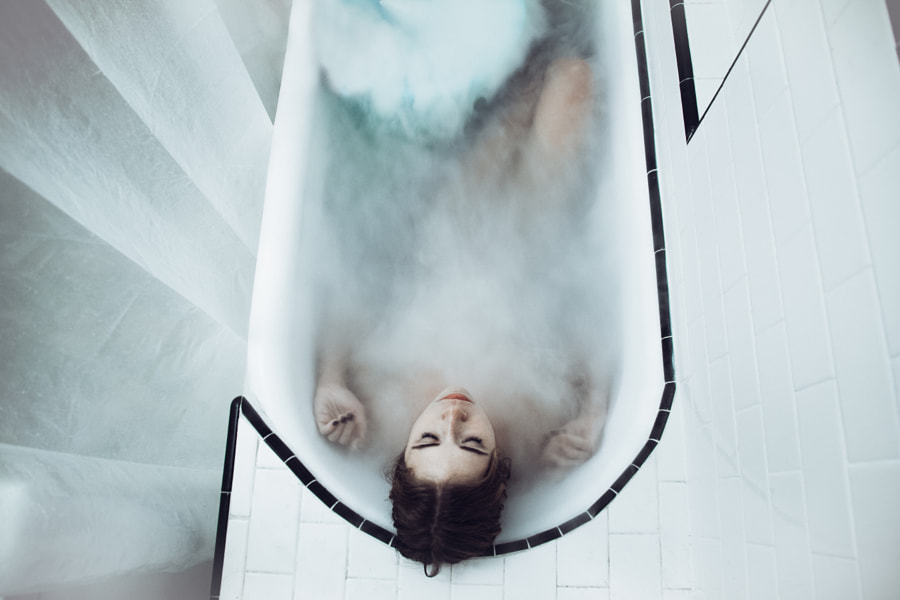 “It was simple: portraiture stripped of culture, civilization, or association. All that’s left is human emotion. And most of the time clothing distracts from that concept and all the feelings that go along with it. Nude photography and self-portraiture began to take on a life in my work.

“When a photographer shoots their subjects in the nude without a sexual motivation (whether underlying or not), one has to wonder what IS the meaning behind it?

“The reason for me goes back to the general concept behind my work: Pure emotion.

“When someone looks at my photos I want them to get lost in the ethereal detachment, unburdened by all things except pure feeling or mood. Emotions have always been held at the highest in my life, and they have always been the key to most of my decision making.

“Clothing is just one thing that can take a person out of that ethereal world of feeling.? It dates and defines a culture. It can define what kind of person the model is supposed to be, and can also define the mood of a photograph, which can in turn clash with the intended mood.

“When I started shooting without the distraction of clothing I discovered such an ease to my conceptual process. Looking back at my earlier personal work, I find it almost silly that I was trying to incorporate elaborate clothing into photos with such a strong tie to nature and the simplest of essences that makes us all a part of it.

“Every nude photographer has their own approach, but I personally am not necessarily focusing on the subject’s body or the beauty of their anatomy when I’m shooting.” 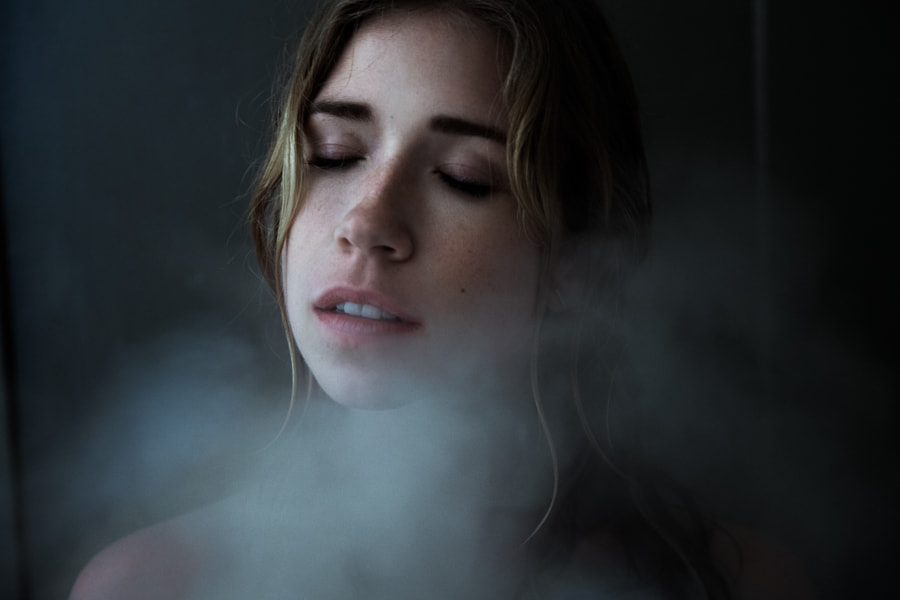 For Brigman, the early 20th-century nude photographer and self-portraitist, nudity also wasn’t about anatomy or physical desire so much as it was about spiritual and emotional storytelling. “My pictures tell of my freedom of soul, of my emancipation from fear,” she wrote in 1913. Like Lauren, she was the subject of her own narrative rather than an object for male pleasure.

Brigman’s early career in nude photography coincided with the fight for women’s suffrage; Lauren’s coincides with modern feminist movements like #MeToo and Time’s Up. It might be a coincidence, but perhaps the likelier explanation is that during times of revolution and rebellion, female nude photographers have helped change–and continue to reshape–the way we see women, female body, and body image.

The Female Gaze in Nude Photography 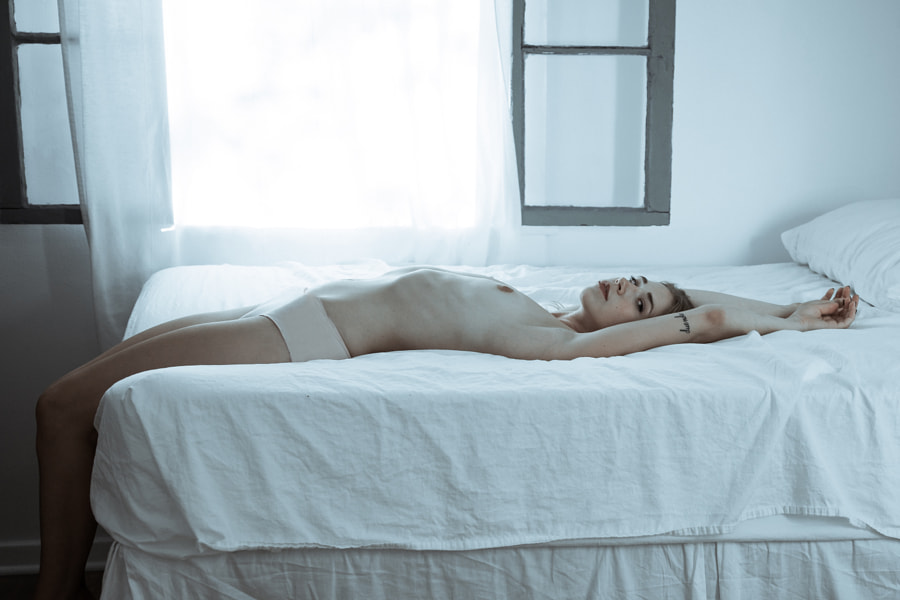 Lauren Naylor: “Most of my subjects are female, probably because I can more easily relate and channel my concepts and moods through women better than I can with men. Men have always been a challenge for me, but I never want to stop pushing myself and experimenting with new things that make me nervous.”

Lauren Naylor: “Unfortunately, what I said above about photographers with ulterior motives wasn’t completely off-base. It has always been a controversial topic with an unfortunate amount of truth to the negative side of it. Let me start off by saying in no way is this every nude photographers’ agenda and every model/subject has a choice of which kinds of photographs they partake in and what kinds of poses they agree to do, of course.

“I can’t help but feel like these kinds of photos are becoming more and more prevalent in modern photography and I would love to see this trend fade away into the abyss of the outdated what-the-hell-were-they-thinking category.

“When I hear about talented photographers shooting nudes inside my own community that are bragging about their sexual escapades with their models, it’s even more of a buzz kill. I have a problem with this, not because of the personal decisions made by model and photographer (hey, do whatever you want!), but because it’s disheartening to have such faith in an artistic concept, only to have it unmasked as just a phony imitation.

“It’s like finding out that your favorite band actually buys all of their lyrics and doesn’t write anything themselves. The authenticity you once trusted in and sang along to (or maybe even cried to) during one of those long agonizing breakups is now void.

“It can be a controversial subject with a sometimes very fine line between tasteful and…not. However, I think that nude photography plays a huge part in how I communicate through my photographs, and I’ll continue to stand on the ‘nude’ side, doing my best to advocate creativity, not crass.” What exactly does it mean to take nude photographs that are creative rather than crass? To start, it means respecting your model on and off set. Always make sure they give their legal consent by signing a model release.

Take the time to explain your intentions–and all the potential ways the photos could be used in the future. Communicate with your models about your goals for the nude photography shoot, and ask for their feedback along the way.

The most important rule? Don’t touch your model–ever. His or her comfort and safety always come first, especially during a nude photoshoot. Watch the temperature in the studio; your model should be warm, even if it means you have to sweat a little. 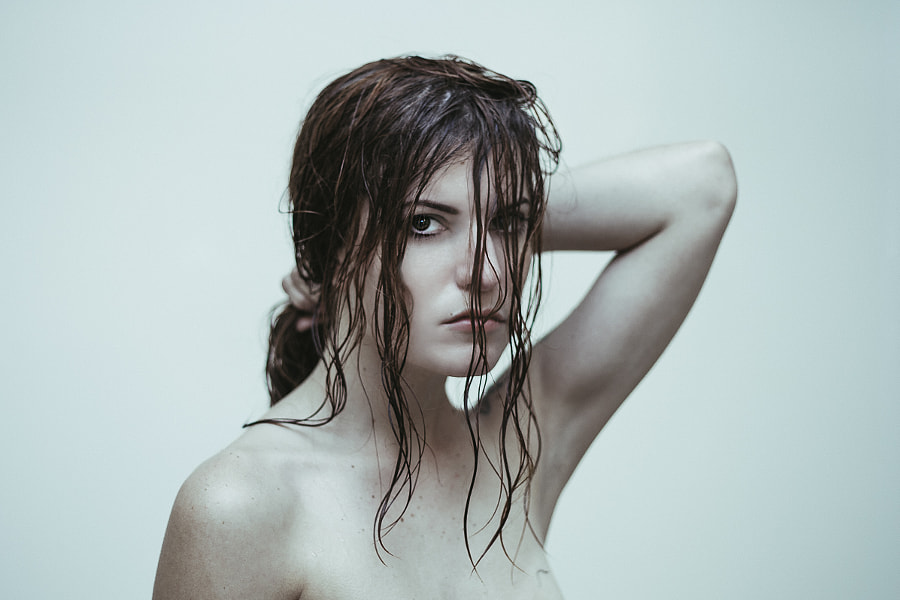 Remember to provide clean, comfortable robes for the majority of your nude photography shoot. If you have a large team of stylists and makeup artists, your model might prefer to disrobe only after they’ve left the studio. It also helps to pose your models while they’re covered before asking them to remove the robe.

Throughout any nude photography shoot, feel free to share the images you’ve taken. Your model will appreciate the chance to give you feedback in real-time–and a quick peek could provide an extra confidence boost mid-shoot. Think of them as collaborators rather than subjects alone. 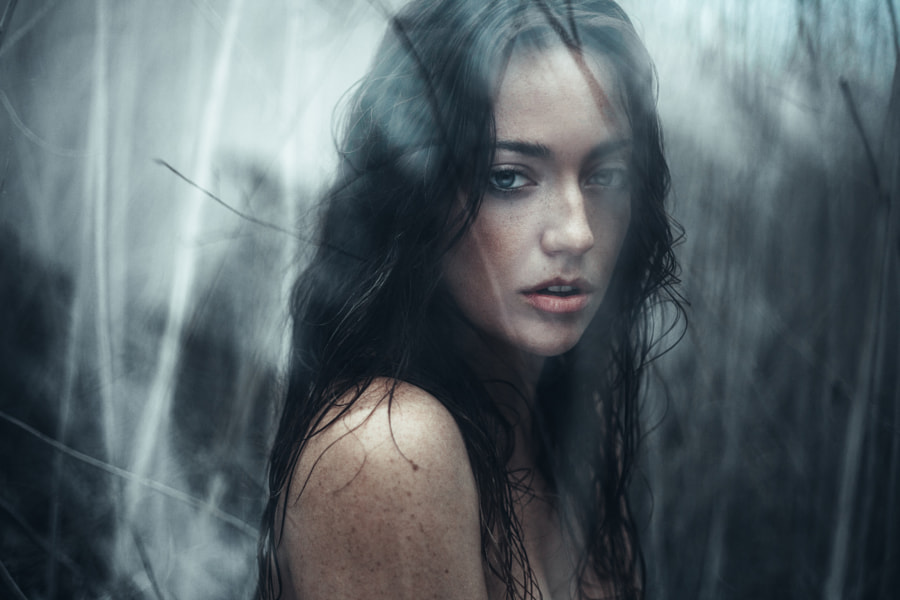 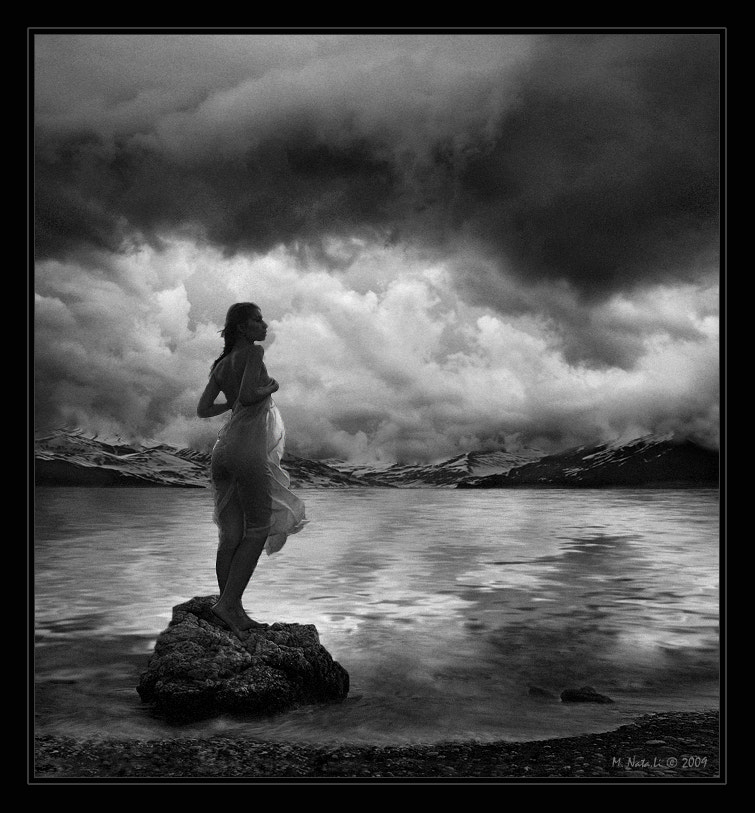 Nude photography doesn’t have to be fully nude. The subtle suggestion of nudity can be as powerful as overt nakedness. Depending on your concept, think about incorporating some fabric or clothing into your nude photography shoot. You can use a pretty bed sheet to reflect light and obscure portions of the body, or use creative, sculptural poses to hide parts of the body from view.

Keep it mysterious. In a similar vein, you don’t always have to include the subject’s face in your nude photography. In some cases, the model might prefer to remain anonymous. That’s not a roadblock so much as it is a creative challenge; use it to evoke a sense of mystery.

Use props wisely. As early 20th-century black and white nudes and photography have taught us, nude photography is all about shapes, light, and shadow. Use large windows that allow light to stream into the room, and bring out some unique props (mirrors, curtains, lace, etc.) to help bend and manipulate the light. 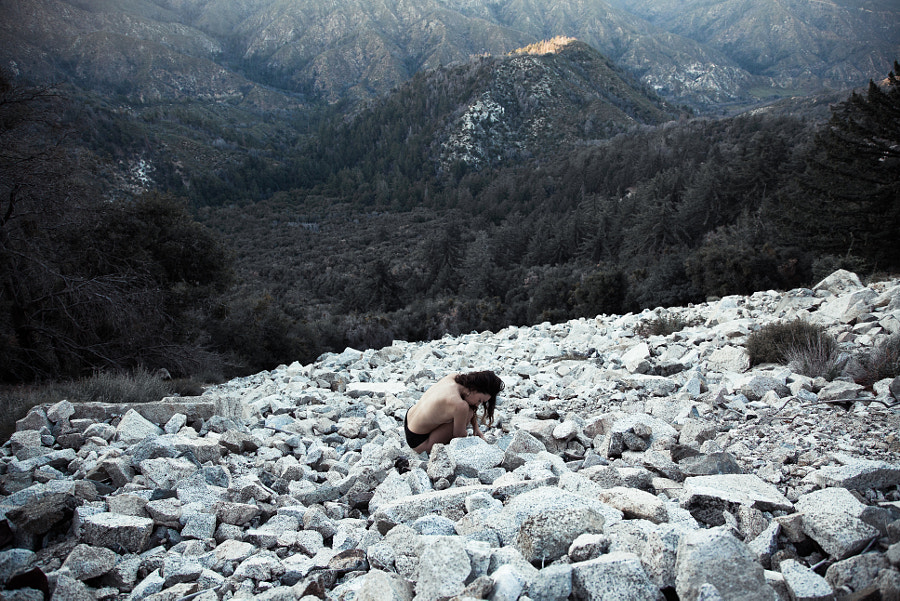 Don’t be afraid to move outside. The studio is a more controlled environment, but as Brigman and Lauren have taught us, landscapes offer at least as many creative possibilities for nude photography. Scout private, outdoor locations with beautiful light for an ethereal, Edenic vibe.

Lauren Naylor is a 27-year-old conceptual portrait photographer based in Los Angeles, CA. Her dark, moody fine art portraits aim to evoke core human emotions that she believes are commonly repressed or ignored in American modern society.Follow her on 500px, the website or on Instagram.

Article was republished by FeatureShoot.